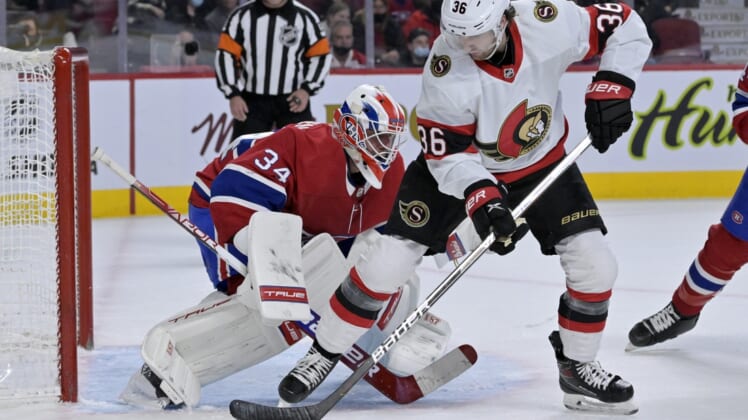 The Ottawa Senators might be playing well enough to finally beat the Montreal Canadiens this season.

After going 4-10-1 in March, Ottawa (25-37-6, 56 points) opened April with consecutive 5-2 wins in a home-and-home series against the Detroit Red Wings. The Senators previously won three straight from Dec. 2-6.

While Tkachuk owns a team-leading 49 points, teammate Josh Norris reached the 30-goal mark in his second full NHL season with his first career hat trick on Sunday. Norris is the 10th different Senator to reach the 30-goal mark and the first since Milan Michalek and Jason Spezza did it during the 2011-12 season.

“His shot and the ability to score take over,” Senators coach D.J. Smith said of what impressed him most about Norris, who has 11 goals and five assists over his last 13 games.

Norris scored during Ottawa’s 5-1 loss at Montreal on March 19.

The Canadiens (19-39-11, 49 points) have outscored the Senators 7-2 in their two meetings this season. Montreal, though, is amid a 4-5-4 stretch but salvaged a 1-2-1 road trip by overcoming an early two-goal deficit in Saturday’s 5-4 shootout victory at Tampa Bay.

Montreal, already eliminated from postseason competition, last won back-to-back contests March 3 and 5. The Canadiens also will try to win consecutive home games for the first time since taking three in a row from Feb. 17-23.

“We talk about being process-driven and not so much result-driven, ” said Martin St. Louis, who is 11-9-4 since taking over as interim Canadiens coach. “I think the result will just come along if you just focus on the process. And I think we did a good job of that (against Tampa Bay).”

In his first full NHL season, Montreal’s Cole Caufield continues to fair well within that process. He tallied his 15th goal Saturday and will return home, where he’s totaled 11 with five assists in his last 13 games. Caufield also scored in last month’s win over Ottawa.

Montreal’s Jake Allen made 29 saves in that win against the Senators, and 37 vs. Tampa Bay over the weekend. Since returning from an almost two-month absence due to a lower-body injury, Allen has averaged 38.3 saves while going 3-3-2 with a 3.36 goals-against average.

Meanwhile, his Canadiens teammate Sam Montembeault went 2-3-2 with a 3.99 GAA in March.

Ottawa’s Anton Forsberg made 30 saves Sunday and is 3-2-1 with a 2.16 GAA in his last six starts. Meanwhile, the Senators’ Mads Sogaard could get the start after recording 27 saves in winning his NHL debut Friday at Detroit.