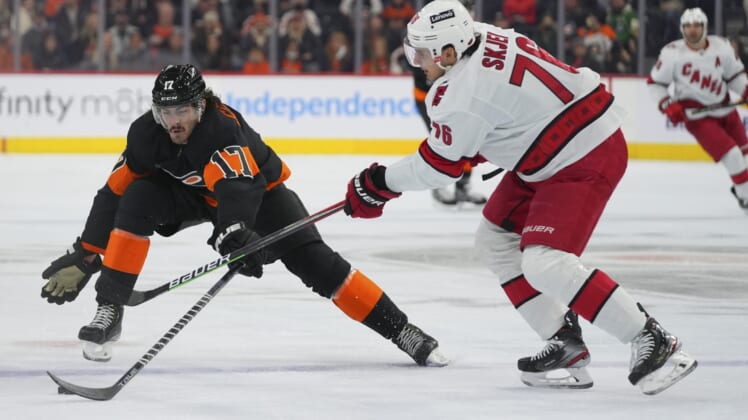 Sebastian Aho scored two goals to lift the Carolina Hurricanes to a 6-3 victory over the Philadelphia Flyers on Friday afternoon.

Jesperi Kotkaniemi added one goal and one assist and Antti Raanta made 20 saves for the Hurricanes, who snapped a two-game losing streak (0-1-1).

Joel Farabee and defensemen Ivan Provorov and Rasmus Ristolainen each scored one goal and Carter Hart made 30 saves for the reeling Flyers, who have dropped five in a row (0-3-2).

The Flyers quickly went ahead 1-0 just 50 seconds into the first period after Provorov scored. Captain Claude Giroux’s pass went through Sean Couturier’s legs and Provorov sent the puck into the net. The Hurricanes challenged the call but were denied.

Carolina tied the game at 1 when Aho fired a slap shot over Hart’s glove at 13:40 of the first period.

Philadelphia seized a 2-1 advantage at 17:02 of the first period after Farabee skated between a pair of Hurricanes and scored shorthanded.

Aho’s second goal occurred 23 seconds into the second period, but the Flyers regained the lead at 1:16 after Ristolainen blasted a shot to the short side at 1:16.

Carolina tied the game 29 seconds later when Fast notched his sixth goal of the season.

The Hurricanes stayed aggressive and moved out to a 4-3 lead at 5:48 when Kotkaniemi tapped the puck into a near empty net.

Lorentz received a pass at the point, skated in all alone and scored for a 5-3 lead at 16:22 of the second.

Philadelphia’s Scott Laughton and Nate Thompson each had strong scoring chances in the first five minutes of the third.

After the Flyers’ surge, Svechnikov connected at 4:50 for a 6-3 Carolina lead.

Raanta kept the Flyers off the scoreboard the rest of the way.