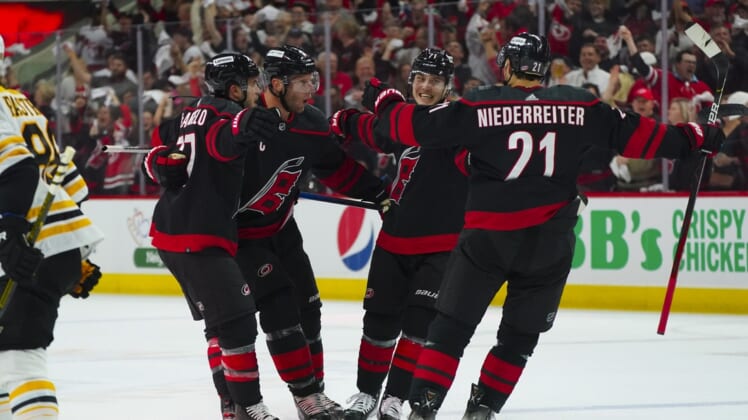 Patrice Bergeron scored twice for the Bruins and Linus Ullmark stopped 29 of 33 shots.

The Hurricanes have outscored the Bruins 10-3 through the first two games after sweeping the three-game, regular-season series by a 16-1 margin.

Kochetkov, who had three previous games of NHL experience, got the call when Antti Raanta, who was already starting for the injured Frederik Andersen, left 7:47 into the game after a collision with David Pastrnak.

Kochetkov didn’t look like a playoff newcomer, even getting coincidental slashing penalties with Boston’s Brad Marchand late in the second period.

The Hurricanes took the lead at 13:03 of the first after a Boston turnover in its own end. Jordan Staal worked the puck along the boards and fired a cross-ice pass to Fast for a one-timer from the left faceoff circle.

Aho made it 2-0 at 15:30 of the period, redirecting DeAngelo’s shot from the point past Ullmark.

The Hurricanes increased the lead to 3-0 on a power-play goal at 1:10 of the second, with Aho blasting a one-timer from the top of the left faceoff circle.

The Bruins pulled within 3-1 as Bergeron found the puck in a scrum in front of the net on the power play and tallied on a backhander at 14:57.

The Hurricanes regained their three-goal advantage at 18:52 of the period, as Niederreiter poked a loose puck over the goal line with the man advantage.

The Bruins made it 4-2 at 12:21 of the third as Charlie McAvoy’s shot from the right point went off Bergeron’s skate and into the net.

Niederreiter closed the scoring with an empty-netter at 19:19.

Defenseman Hampus Lindholm, the Bruins’ big trade-deadline acquisition, left the ice after taking a thunderous hit from the Hurricanes’ Andrei Svechnikov behind the Boston net with 2:49 left in the second period and didn’t return.