The Seattle Storm began their quest to repeat as WNBA champion with a 97-83 win over the Las Vegas Aces in a rematch of the 2020 WNBA Finals.

A’Ja Wilson, last season’s MVP, did everything possible to push Las Vegas to a victory. She scored 24 points, adding on five rebounds and four assists. The Aces’ other star, Liz Cambage, had 16 points and five rebounds. 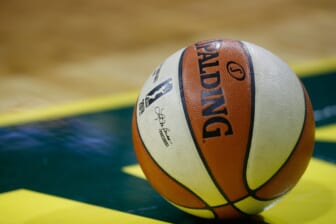 This game followed a similar formula to the Chicago Sky-Washington Mystics game with the hotly contested first quarter followed by a run in the ensuing quarters that subsequently blew the game wide open. But in this matchup, Seattle hit its stride on a big third-quarter run.

After the Aces snuffed out Seattle’s run in the second quarter, turning a 14-point deficit into a six-point game, the Storm responded after halftime. Seattle opened the second half on a 10-0 run, paving the way to a decisive victory.

The Storm had a brief scare in the fourth quarter when Bird seemed to suffer a knee injury after clashing with Cambage. Fortunately, she returned to the court in the closing minutes and shouldn’t miss any time.