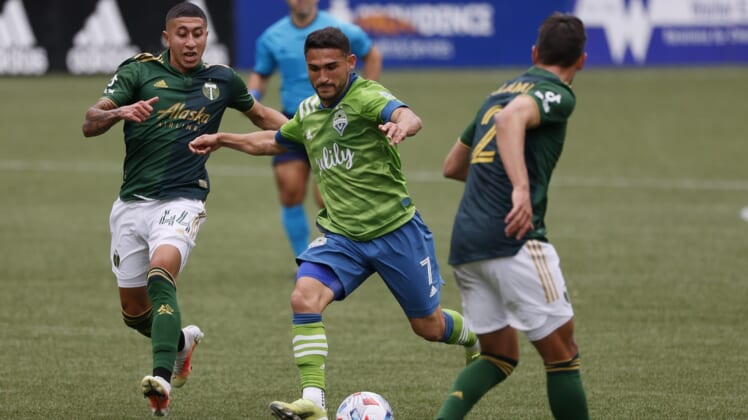 Raul Ruidiaz converted a penalty kick in the 63rd minute, substitute Fredy Montero added a late goal off a set piece, and the Seattle Sounders continued their unbeaten start to the season with a 2-1 victory at the rival Portland Timbers on Sunday afternoon.

Ruidiaz had another late goal disallowed for the Sounders (3-0-1, 10 points) that would have tied him with the Los Angeles Galaxy’s Javier “Chicharito” Hernandez for the league lead with six. As it stands, Ruidiaz has five for Seattle, which won for the fourth time at Portland since 2018.

Bill Tuiloma struck on a brilliant free kick late to give to Portland a goal in the fourth minute of extra time. It was just the fourth goal in four games for the Timbers (1-3-0, 3 points).

Diego Valeri twice missed penalties that would have given Portland the lead earlier in the second half, the first ordered to be retaken after it was ruled Sounders goalkeeper Stefan Frei had encroached off his line to make the save.

Portland goalkeeper Jeff Attinella had to leave the game in the second half after suffering a non-contact hip injury and was replaced by 19-year-old Hunter Sulte.

Portland could have taken control when Sounders defender Shane O’Neill took down Jeremy Ebobisse, who was on the break following a giveaway in Seattle’s end. Valeri drove the first penalty directly into Frei’s body. After a video review, referee Chris Penso ruled Frei had left his line early and ordered a retake.

Valeri struck the second attempt off the left post and then hammered the rebound across the line himself. But that was disallowed because it did not touch another player first.

Ruidiaz avoided drama on the other end a few minutes later after he was fouled by Tuiloma. Ruidiaz cleanly finished low inside the right post to give the Sounders the lead.

The Sounders increased the lead to 2-0 in the 79th minute when Montero headed in Joao Paulo’s free kick.

Tuiloma’s late 25-yard set piece, which curled over the wall and inside the left post, gave the Timbers slight hope in the fourth minute of stoppage time. But the final whistle came two minutes later.