The Seattle Seahawks sure could use some of that Monday night magic.

The Seahawks, who have won 11 of their past 14 Monday night appearances and whose .711 winning percentage on Monday night is tops among all teams, are practically in must-win territory heading into their road matchup against the Washington Football Team.

The defending NFC West champion Seahawks (3-7) have lost two consecutive games and five of six overall, leaving them ahead of only winless Detroit in the conference standings. Seattle took a 23-13 loss to the visiting Arizona Cardinals last week, despite the Cardinals being without quarterback Kyler Murray and star receiver DeAndre Hopkins.

“I feel like when you watch these games and you watch some of the games that we let slip away, a lot of it has come down to us getting in our way,” Seahawks linebacker Bobby Wagner said. “Whether it has been dumb penalties, whether it’s been mistakes that we’ve made, I feel like there is time to right those wrongs.” 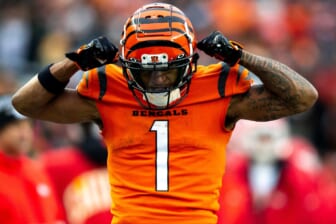 The Seahawks are a 1-point road favorite and are being backed by lopsided action. Seattle has been supported by 58 percent of the bets and 63 percent of the spread-line handle at DraftKings and 63 and 78 percent, respectively, at PointsBet.

However, AI-driven analytics company Quarter4 is forecasting Washington with a 63 percent probability of winning.

Other than a 17-0 loss two weeks ago at Green Bay — a game in which the score was 3-0 heading into the fourth quarter — the Seahawks have been in nearly every game at the end. They were 8-3 in contests decided by eight points or less last season and are 1-3 in such games this year.

Injuries have played a part.

Quarterback Russell Wilson, who had never missed a game in his 10-game career, sat out three contests after finger surgery and has struggled with his passing accuracy since returning.

Starting running back Chris Carson needs neck surgery and is out for the year, as is starting cornerback Tre Brown, who sustained a knee injury last weekend. Wide receiver DK Metcalf (foot), running back Rashaad Penny (hamstring) and offensive linemen Damien Lewis (elbow) and Jamarco Jones (back) have missed practice time this week, as has defensive lineman Benson Mayowa (knee).

When asked how this season might affect how Wilson views his future in Seattle, coach Pete Carroll said, “I’m really looking at how a 7-0 finish is going to affect all of us, more so.”

Washington (4-6) has won two in a row, beating defending Super Bowl champion Tampa Bay 29-19 at home and then posting a 27-21 victory at Carolina last week.

Taylor Heinicke had the highest passer rating (141.9) of his career against the Panthers, completing 16 of 22 passes for 206 yards and three touchdowns. Terry McLaurin caught five passes for 103 yards and a touchdown, and Antonio Gibson rushed for 95 yards on 19 carries.

“I think they’re starting to play together,” coach Ron Rivera said. “They’ve become resilient. They do the things they need to. They rely on each other.”

Heinicke took over in Week 2 after Ryan Fitzpatrick, signed in the offseason to be the starter, sustained a hip injury in the opener.

“I’m not saying this guy is going to be a Hall of Famer, but again, if this guy continues to manage and direct and then make plays when we need them, that’s what I’ve always said we’re hoping to get out of this — a guy that can do that,” Rivera said of Heinicke. “We were fortunate where we got a lot of that last year, and we’re hoping to build off of what we got right now, and we’ll see what happens.”

Cosmi was placed on injured reserve Monday and replaced by Jon Toth from the practice squad, while tight end Logan Thomas was activated from IR.