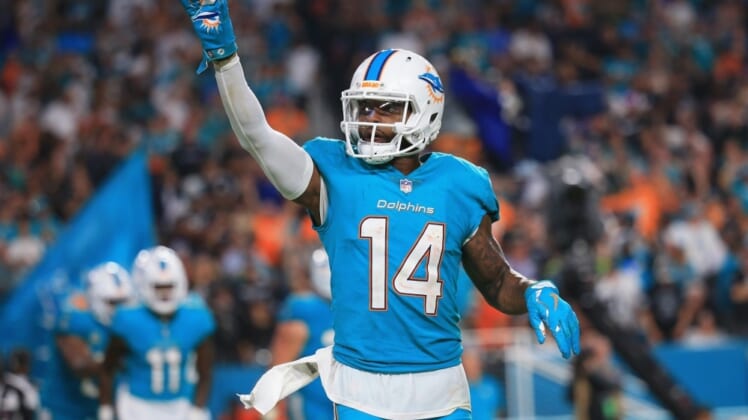 A Landry-Carr connection would have been sweet, but it’s not meant to be.

Although many in Raider Nation wanted General Manager Reggie McKenzie to target the highly touted wideout, news out of Miami means he’s not going anywhere.

The Miami Dolphins made it official tonight – talented wide receiver Jarvis Landry was slapped with the team’s franchise tag meaning he will not be on the free agent market.

We have placed the franchise tag on wide receiver Jarvis Landry.

This is disappointing news to many in Raider Nation who would have loved for Derek Carr to be able to throw to the 25 year old, 6-foot, 200 pound target. Landry, who caught 112 balls for almost 1,000 yards and nine touchdowns in 2017, never did hit the open market as the Dolphins agreed to tag him and pay him a projected $16 Million for next season.

Miami is said to be working on a multi-year deal with Landry meaning his one year deal will have a similar salary cap hit as a guaranteed bonus on a longer deal.

A Landry-Carr connection would have been sweet, but it’s not meant to be.

With Landry off the market, does that mean the Raiders will look to wrap up and bring back Michael Crabtree again? Or will they have other wide receiver targets when free agency kicks in during the middle of March?

As our review of the Raiders roster at the position indicates, there could be several changes in the wide receiver corps for Oakland. One of the other potential free agent targets for Jon Gruden and the Raiders could be Jacksonville Jaguars receiver Allen Robinson. Yet, the same fate is expected of the Robinson as Landry – the franchise tag.

The Raiders have some decisions to make at the position to be certain. Amari Cooper will be back but past that, it’s still a crapshoot. Crabtree, Seth Roberts, and Johnny Holton share unknown status while it’s expected Cordarrelle Patterson will return in his specialist role.