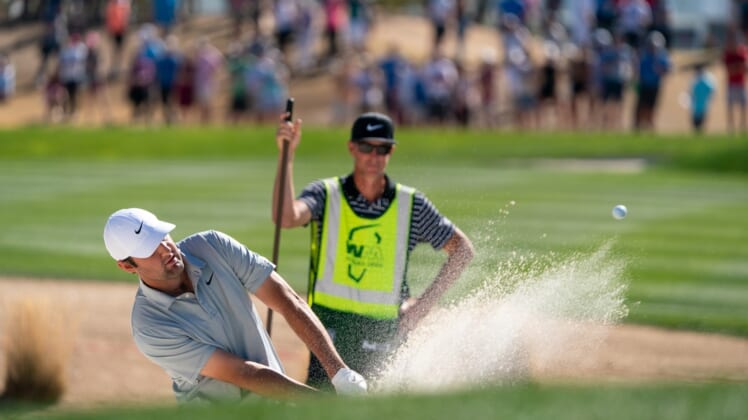 Feb 13, 2022; Scottsdale, Arizona, USA; Scottie Scheffler plays from the green side bunker on the third as caddy J.Tedd Scott looks on during the final round of the WM Phoenix Open golf tournament. Mandatory Credit: Allan Henry-USA TODAY Sports

Scottie Scheffler rolled in a 26-foot birdie putt on the third playoff hole at the Waste Management Phoenix Open in Scottsdale, Ariz., and won his first title on the PGA Tour after Patrick Cantlay missed his chance to extend.

Scheffler landed his tee shot on that hole in a bunker right of the fairway, but he rescued himself with a second shot that found the green and set up a straight, uphill putt.

The 25-year-old Texan was ranked 15th in the Official World Golf Ranking this week and played for the victorious American team at last fall’s Ryder Cup, beating Spanish star Jon Rahm in singles. But a PGA Tour win was missing from his resume until Sunday, when he drew the plaudits of an enthusiastic TPC Scottsdale crowd.

“Such a great place,” Scheffler said on the CBS broadcast, his wife by his side. “Such a fun week and I’m very pleased.”

Scheffler and Cantlay each shot 5-under-par 67s in their final round and finished at 16-under 268. Scheffler charged up the leaderboard with four birdies in his final six holes.

Both players missed birdie putts at the par-4 18th hole to get to 17 under, so they replayed No. 18 three times before a winner was decided.

“Patrick is obviously a phenomenal player, and I knew one of us was going to have to make a birdie,” Scheffler said. “Par wasn’t going to do it. This is a really hard tee ball for me. It’s hard for me to get it in play, so I knew if I had an opportunity I really had to take advantage of it.”

Three others fell one shot shy of the playoff. Sahith Theegala, the 54-hole leader in search of his first Tour victory, carded a final-round 70 and went 15 under for the week for a share of third. His tee shot at the short par-4 17th hole bounced left of the green into the water, leading to a costly bogey.

“I thought I hit a great shot on 17,” Theegala said. “It was cutting. As long as it’s another yard right, I think that’s perfect. Kick straight and it’s good. Kicked left into the water there.”

“But definitely proud of the way I played this week,” the PGA Tour rookie added.

For the second straight day, the fans at the famed par-3 16th hole were treated to a hole-in-one. Mexico’s Carlos Ortiz striped a 9-iron and watched it hop and roll straight into the cup one day after Sam Ryder carded an ace there.

On both occasions, the rowdy group in the enclosed stadium-style seating celebrated by tossing adult beverages onto the hole below.

“I don’t even know what to say. It was unbelievable,” Ortiz said. “I didn’t know how to react. A lot of people cheering for you, and then you start trying to watch out for your head because I got actually nailed pretty hard on the back with a beer can on the back, and then after that I was just trying to just avoid all the cans I could.”