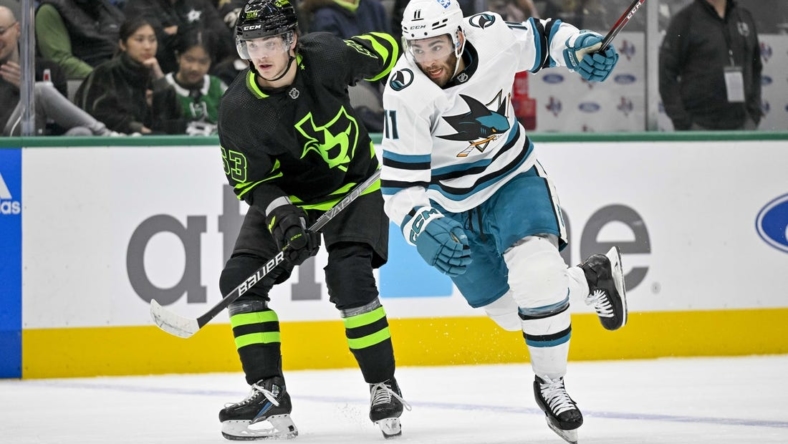 Timo Meier and Logan Couture scored 1:05 into the second period to break a tie game, then the visiting San Jose Sharks held on to snap a five-game winless rut with Friday night’s 5-4 victory vs. the Dallas Stars.

Alexander Barabanov and Tomas Hertl also had a goal with an assist each, and James Reimer made 25 saves for the Sharks, who were mired in an 0-3-2 slide. San Jose also snapped a seven-game losing streak at Dallas.

With the game tied 2-2 after a period, the Sharks made Dallas pay for an own-zone turnover that resulted in Meier ringing the far post — 29 seconds in — behind the Stars’ Jake Oettinger, who allowed a season-high five goals and made 13 saves after missing the last four games with a lower-body injury.

After Hertl’s goal 29 seconds into the third put San Jose ahead 5-2, Dallas’ Roope Hintz rang the post himself and Joe Pavelski scored on rebound with 7:54 left in regulation. However, Reimer came up with some key stops to hand the Stars a second straight loss despite two goals from Jamie Benn.

Dallas got out to a strong start, and was rewarded when Benn kept the puck via a two-on-one to beat Reimer. However, San Jose tied it less than two minutes later when Barabanov scored on the power play through traffic.

The Sharks went up 2-1 with 7:42 remaining in the opening frame. Off a one-handed chip-pass from Oskar Lindblom, Evgeny Svechnikov was quick to the puck with his shot in the slot.

However, the Stars tied with just 20.4 seconds left in the first. Taking advantage of a San Jose turnover in its own zone, Benn made the visitors pay with his second multi-goal effort in three games.

But the Sharks further stunned Oettinger and the stars with those two goals in the second. San Jose recorded just one shot the rest of the period, while Dallas posted 11 on goal.

The Stars’ Jason Robertson’s six-game goal streak ended, but he had two assists.