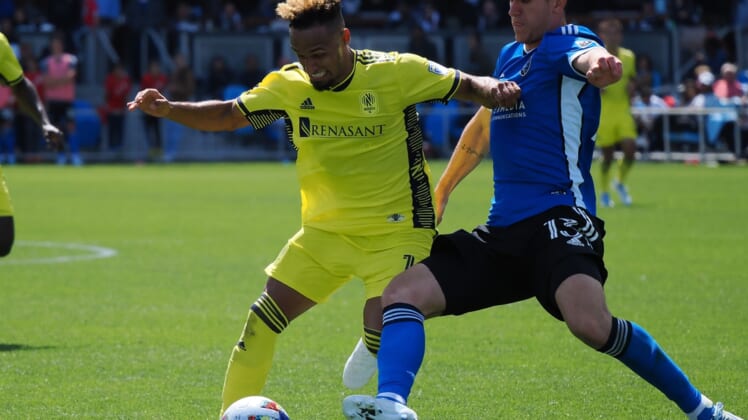 Ebobisse converted a set piece in the 52nd minute and tallied from close range in the 72nd minute to boost his goal total to five in his last three matches. JT Marcinkowski made two saves for the Earthquakes (0-4-3, 3 points), who remain the lone winless team in MLS.

Former San Jose midfielder Anibal Godoy and C.J. Sapong each notched an assist for Nashville SC (3-2-2, 11 points), who were denied in their quest for their second three-match winning streak in franchise history. They won three in a row from Aug. 28-Sept. 11, 2021.

Joe Willis turned aside three shots for Nashville SC, who will complete their season-opening eight-match road trip against the Los Angeles Galaxy next Saturday. The club will then play versus the Philadelphia Union on May 1 at GEODIS Park, their new 30,000-seat soccer-specific stadium.

After erupting for 16 goals last season, Mukhtar netted his first of 2022 by opening the scoring in the 38th minute. Mukhtar used both Godoy and Sapong to open a lane in the offensive end as he scooted up the field before unleashing a shot that sailed past Marcinkowski.

San Jose leveled the contest after Nashville SC’s Daniel Lovitz was whistled for a hand ball. Ebobisse converted the ensuing set piece by bending his shot just inside the left post in the 52nd minute.

Nashville SC answered 11 minutes later as Sapong’s header caromed right to an unmarked Mukhtar, who swept the ball inside the near post to give his club a 2-1 lead. The goal was the second of the day and 22nd career for Mukhtar.