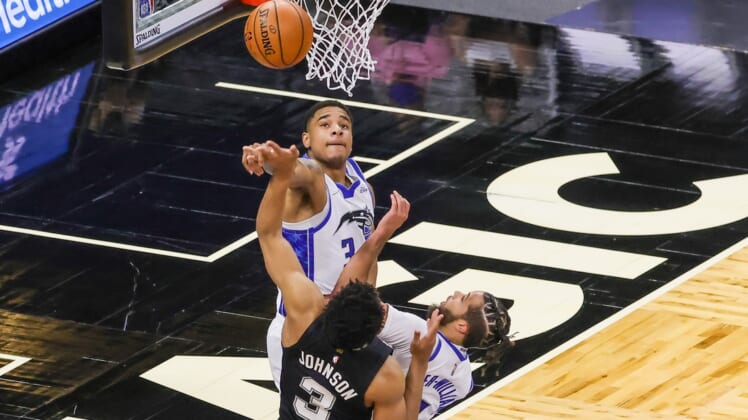 DeMar DeRozan scored 19 points in three quarters of play, and Dejounte Murray added 17 as the visiting San Antonio Spurs rolled to a big lead early and swamped the hapless Orlando Magic 120-97 on Monday in the second game of a back-to-back for both teams.

The Spurs shrugged off a ragged start, roared to the front with an 18-0 run in the first quarter and never looked back, overwhelming Orlando while building a 28-point lead after three quarters. The win was the second straight for San Antonio, which is 2-2 on its current five-game road trip that ends Wednesday against Toronto in Tampa, Fla.

Derrick White added 15 points for the Spurs, with Rudy Gay and Lonnie Walker IV scoring 12 points each and Drew Eubanks hitting for 10 points. Keldon Johnson had 11 rebounds and Eubanks pulled down 10.

R.J. Hampton led the Magic with 16 points while Wendell Carter Jr. had 15, Dwayne Bacon scored 14 and Cole Anthony added 12. Orlando has lost six consecutive games, including all four on the homestand that ended Monday.

The Spurs used a 21-3 run over the final 7:16 of the first quarter to rush past Orlando and forge a 28-16 lead at the end of the period. The Magic missed their final 14 shots from the floor in the quarter.

San Antonio kept its foot on the gas through the seven minutes of the second period, building its advantage steadily through the quarter. DeRozan’s bucket with 5.5 seconds left secured a 60-37 lead at halftime, the Spurs’ largest of the half.

The only players in double figures in the first half were DeRozan with 11 points and Gay with 10. San Antonio outshot the Magic 48.9 percent to 30.2 percent, with the Spurs sinking 47.1 percent of their shots from beyond the arc (8 of 17) and Orlando going just 3 of 13 (23.1 percent) from long distance.

Carter and Bacon led Orlando with eight points each over the first 24 minutes.

The Spurs expanded their advantage to 28 points, at 69-41 at the 9:23 mark of the third quarter, and rolled to the easy victory.