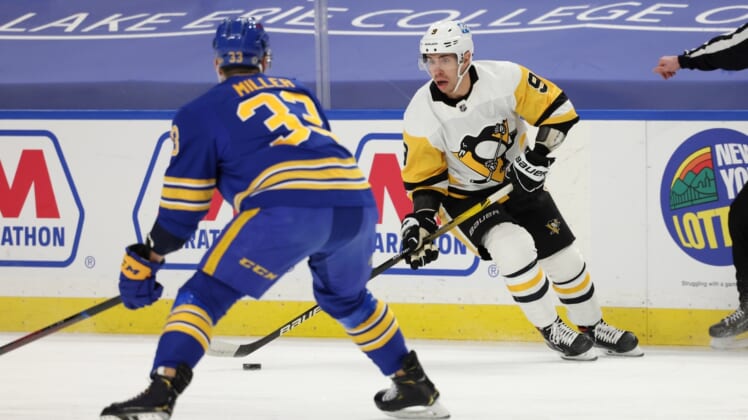 Arttu Ruotsalainen and Rasmus Asplund also scored, and Victor Olofsson and Rasmus Dahlin each added two assists for the Sabres, who earned a split of back-to-back games between the clubs at KeyBank Center and moved to 6-3-3 in their past 12 games.

Tokarski started for the second day in a row after facing 41 shots Saturday in a 3-2 Pittsburgh win.

Jason Zucker and Teddy Blueger scored, and Casey DeSmith made 25 saves for Pittsburgh, which had won the first five games of the teams’ season series.

Entering the game, DeSmith, Pittsburgh’s backup, had three shutouts in four career starts against Buffalo, including a shutout streak of 1:79:52.

That streak didn’t last long, as Ruotsalainen gave the Sabres a 1-0 lead 26 seconds into the first period. Off a two-on-one with Pittsburgh defenseman Brian Dumoulin defending, Ruotsalainen took a pass from Dylan Cozens and one-timed it past DeSmith’s glove.

It was Ruotsalainen’s second goal in his sixth NHL game. It was Cozens’ fifth assist in five games.

As with the first, Buffalo scored the only goal in the second.

From the right dot, Reinhart got off a shot that went past Penguins defenseman Marcus Pettersson, off the far post and in at 2:18 to give the Sabres a 2-0 lead.

Reinhart struck again at 8:02 of the third on a power play. From a similar area in the right circle, Reinhart this time went short side with a high shot to beat DeSmith and make it 3-0.

At 10:18 of the third, Zucker broke up Tokarski’s bid for a second career shutout. Off a faceoff, Zucker got to the puck in the left circle and rifled it between Tokarski’s pads to cut it to 3-1.

Asplund added an empty-netter with 1:48 left, rendering Blueger’s goal with 23.2 seconds left too little, too late.