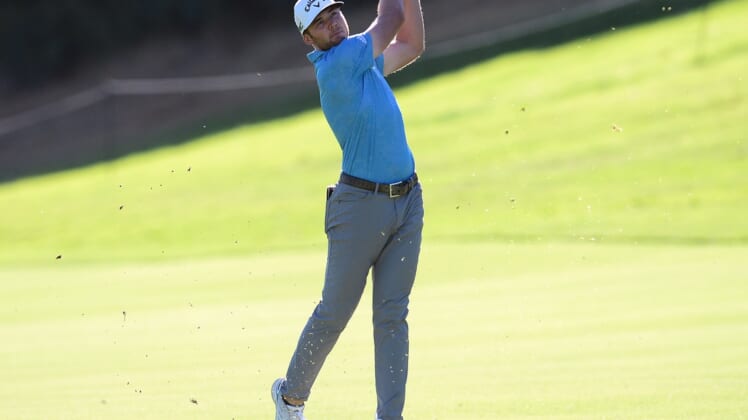 Sam Burns opened with an eagle and closed with three consecutive birdies while building a two-shot lead Thursday after the opening round of the Genesis Invitational in Pacific Palisades, Calif.

Burns shot a 7-under-par 64 at Riviera Country Club. Max Homa and England’s Matthew Fitzpatrick are tied for second at 5 under.

World No. 1 Dustin Johnson, back in action after withdrawing last week to rest, sits at 3 under. He is tied for 12th with Brooks Koepka, who won the Waste Management Phoenix Open last weekend, as well as Jordan Spieth, Keegan Bradley, Talor Gooch, Colombia’s Sebastian Munoz and Italy’s Francesco Molinari.

Burns, 24, is winless in 69 previous PGA Tour starts. His best result was a tie for third place in the 2018 Sanderson Farms Championship.

He reached the green on the 509-yard first hole in two shots, then sank a 19-foot putt for eagle. After adding four birdies and two bogeys over the next 14 holes, Burns sank birdie putts of 20, 10 and 4 feet to cap his day.

“I think we were just pretty consistent throughout the round,” Burns said. “We knew we were going to have a tough stretch there to kind of start the back nine. I think just being patient out here (helped).

“This golf course at times doesn’t offer you a lot of opportunities, so I think just with that mindset going in we were just going to kind of take what we could get.”

Fitzpatrick also eagled No. 1, but it was his 10th hole of the day.

“It was a good day overall,” Fitzpatrick said. “I felt like I played probably better than my tee-to-green stats would suggest. My swing actually felt pretty good. There’s a couple loose ones in there, try to fix that this afternoon, but on the whole it’s a great start, couldn’t ask for any better.”

Homa’s day was highlighted by a string of four consecutive birdies mid-round.

“I did everything really well,” Homa said. “It was pretty stress-free. I drove it really well, I kept my irons where I needed to keep them. I missed quite a few greens in the beginning, but they were always in the right spots so I kind of felt like I stayed patient, trusted my game’s in a good spot and kind of just went with what was given to me.”

Defending champion Adam Scott of Australia is tied for 19th at 2 under.