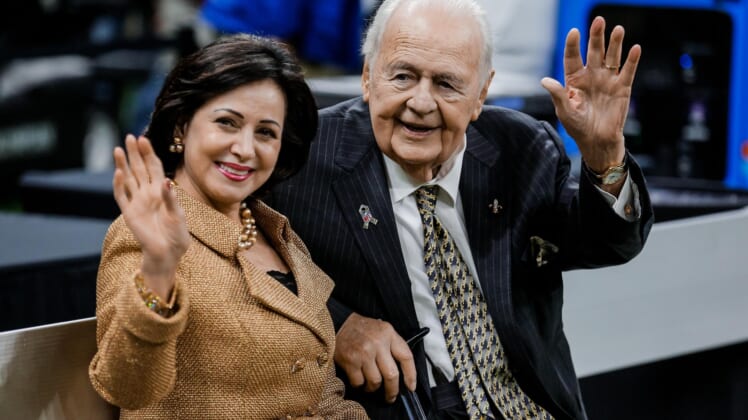 Gayle Benson, the owner of the NFL’s New Orleans Saints and the NBA’s Pelicans, has taken steps to ensure the teams remain in the city after her death.

Benson, who inherited the teams from her late husband, Tom, disclosed the succession plans in a joint report from The Times-Picayune and WVUE-TV. It revealed the plan to sell the Saints and Pelicans to parties who won’t relocate them, then distribute the proceeds to charity.

Per the report, the NFL has OK’d the plan, which is similar to one Ralph Wilson had in place for the Buffalo Bills. Following his 2014 death, the Bills were sold to Terry and Kim Pegula, who are hoping a new stadium can be built in Buffalo.

Gayle Benson was Tom Benson’s third wife and doesn’t have any heirs. Her late husband, who died in 2018, made a private settlement with his daughter and grandchildren to ensure the team stayed in Gayle’s hands, per the report.

“I can’t take it with me,” Benson, 74, said. “God gives us gifts, and this is a gift. I am a steward for this [organization]. And we help other people with it. My wish is to scatter all the good and gifts that God and Tom have given me to this city and community.”

Funds from the sale of the teams would go to charities directly benefiting the New Orleans area. On Aug. 30, Benson launched the Gulf Coast Renewal Fund with a $1 million donation after Hurricane Ida struck Louisiana.

The Saints currently are negotiating a lease extension with the state of Louisiana and the Caesars Superdome. A long-term lease would tie a prospective new owner to the city.

“I want to make sure that we keep the teams here,” Benson added. “I want them to stay in New Orleans forever.”