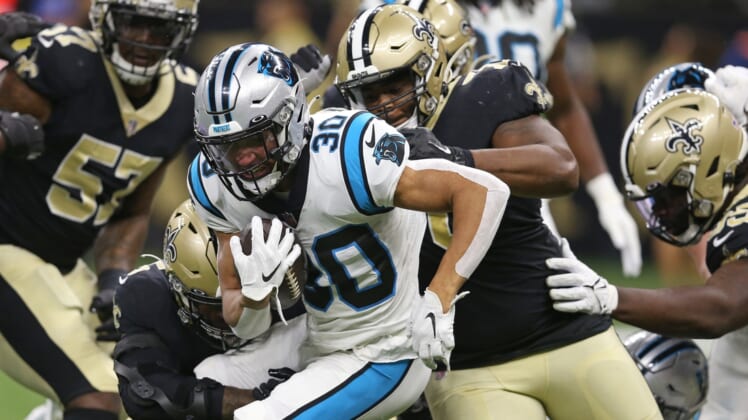 The New Orleans finally scored a touchdown on Alvin Kamara’s fourth-quarter reception and they held on to defeat the visiting Carolina Panthers 18-10 on Sunday.

Brett Maher kicked four field goals to push the Saints into the lead by early in the third quarter.

It was mostly defense that boosted the Saints (8-8), who needed to win in order to keep their postseason hopes alive. New Orleans had seven sacks with 3.5 coming from Cameron Jordan.

The Panthers (5-11), who didn’t score in the second half, have lost six games in a row.

Carolina had a 10-play drive in the works into the final minute until J.C. Gardner-Johnson intercepted Sam Darnold near midfield to end the threat to seal the outcome.

Taysom Hill threw the 12-yard touchdown pass to Kamara and finished with 222 passing yards on 17 of 28 accuracy. He also led the Saints with 45 rushing yards. Marquez Callaway made six catches for 97 yards.

It was the home finale for the Saints, who won for the third time in their last four games. They finish the regular season next week at Atlanta.

Darnold threw for 132 yards on 17-of-26 passing for Carolina. Chuba Hubbard gained 55 rushing yards on 17 carries and a touchdown.

Darnold made his first start since going out with a shoulder injury at midseason. Cam Newton was the starter the past five games, all losses for the Panthers.

The Saints, who didn’t commit a turnover, limited the Panthers to 178 yards of total offense. Maher had field goals from 41, 27, 41 and 33 yards. Lirim Hajrullahu made a 32-yard field goal for the
Panthers to open the scoring, but he missed from 47 yards out with a chance to give Carolina the lead early in the fourth quarter.

The Panthers were ahead 10-3 after Hubbard’s 21-yard scoring run early in the second quarter.

Carolina beat the Saints 26-7 in the second week of the season.