Sabres try to regain momentum; Devils try to find some 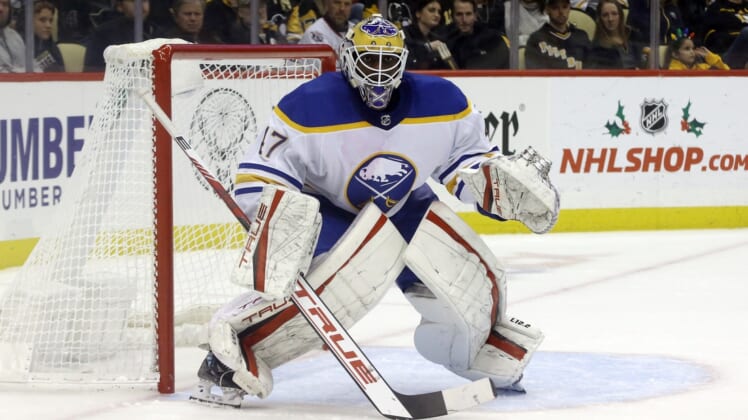 When the NHL hit the pause button, the Buffalo Sabres were pulling themselves out of a deep slump. The New Jersey Devils were hip-deep in the stuff, however.

The Sabres — just 5-14-4 in their past 23 games — hope to chalk up a third win in four games Wednesday night when the teams return to action in Buffalo after a delay of nearly two weeks.

The Devils hope they left their six-game losing streak behind.

Buffalo’s miserable stretch had included losing streaks of four, five and seven games. The Sabres went 0-5-2 from Nov. 27-Dec. 11 but then gained a point in three straight games (2-0-1) and survived being outshot 48-21 in a 3-2 overtime loss in their most recent outing at Pittsburgh on Dec. 17.

But now some of Buffalo’s top scorers — and coach Don Granato — are in COVID-19 protocol.

Granato will not coach the team Wednesday, and none of the Sabres’ players in the protocol suit up, according to assistant coach Matt Ellis, who will coach the team for Granato.

That includes Jeff Skinner, whose nine goals are second on the team. Skinner was placed in the protocol Dec. 21 along with Zemgus Girgensons a day after Vinnie Hinostroza entered. Granato entered the protocol Sunday, along with Mark Jankowski and Dylan Cozens.

To fill the roster spots, the Sabres called up prospects Peyton Krebs, JJ Peterka and Arttu Ruotsalainen from Rochester of the AHL. Krebs was acquired from the Vegas Golden Knights last month for Jack Eichel along with Alex Tuch, who is expected to make his Buffalo debut Wednesday.

The Devils, meantime, are 3-12-3 in their past 18 games since winning three in a row Nov. 6-11. They headed into the pause following a 3-2 home loss to the Pittsburgh Penguins on Dec. 19 and are on this skid despite Jack Hughes returning from missing over a month.

Hughes has three goals since returning, but the Devils are 1-9-1 in those 11 games, a stretch in which they have lost by more than one goal seven times due to possessing one of the league’s least-productive power plays (12.9 percent).

“We’ve had a couple (power-play) goals in the last games, and we just want to make sure that we go out there that we’re making the plays, we know all our routes and outs, and just building on that,” New Jersey rookie Dawson Mercer said after practice Tuesday.

The Devils hope to start turning it around with a healthier lineup after Nico Hischier and Jesper Boqvist returned from the protocols along with defensemen P.K. Subban, Christian Jaros and Ryan Graves. Despite those returns, the Devils will be missing Tomas Tatar, who was placed in the protocol.