Sabres to retire Ryan Miller’s No. 30 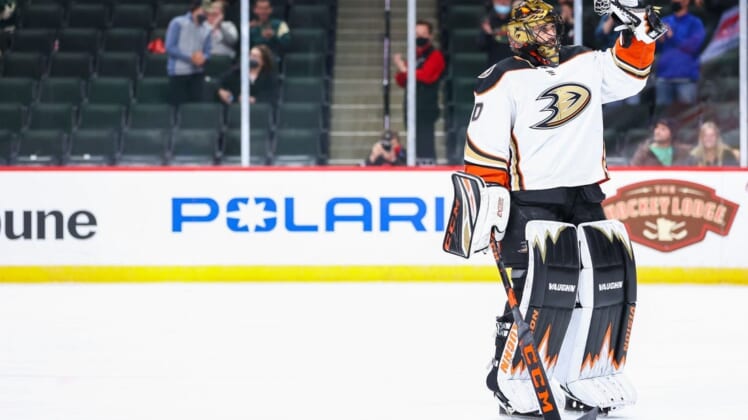 The Buffalo Sabres will induct retired goaltender Ryan Miller into their Hall of Fame and retire his No. 30 in ceremonies next season.

A date will be announced sometime this summer.

“Ryan Miller embodied what people in Western New York expect from those who wear a Buffalo Sabres uniform: on-ice excellence, commitment and authentic love for this community,” Sabres general manager Kevyn Adams said. “His lasting relationship with the people here in Buffalo remains a standard we strive to follow every day.

“We are thrilled for Ryan to take his rightful place alongside his fellow Sabres legends and look forward to celebrating his career.”

Next season, number 30 will take its rightful place in the rafters. pic.twitter.com/3Z2Mos4kso

Miller, a Michigan native, played in parts of 11 seasons in Buffalo after the Sabres selected him in the fifth round of the 1999 NHL Draft. He was traded to the St. Louis Blues in February 2014 and after the season, signed a three-year contract with the Vancouver Canucks, then finished his career with four seasons with the Anaheim Ducks.

He retired following the 2020-21 season with 391 career wins, the most by a goaltender born in the United States.

Miller is most closely aligned with the Sabres franchise, however. He is the team record holder in games played by a goaltender (540), wins (284) and saves (14,847). He had 28 shutouts in a Buffalo uniform, second only to Hall of Fame member Dominik Hasek.

“I’ve always appreciated my experience here as a member of the community,” Miller said. “Coming here and playing hockey was a dream come true. Playing with a great NHL organization and building something with a great group of guys. But then to also feel at home in the city was important to me and to make myself a member of the community where I could give back in different ways.

“That was always important to me. A big part of my time here was interacting with people actually living life here, and not just coming to the rink and going away. I was happy that I was always involved and out and about and felt connected. It really was a great home when I was here.”

Miller will become the 14th member of the team to have a banner with his name hang in the rafters at KeyBank Center in Buffalo.