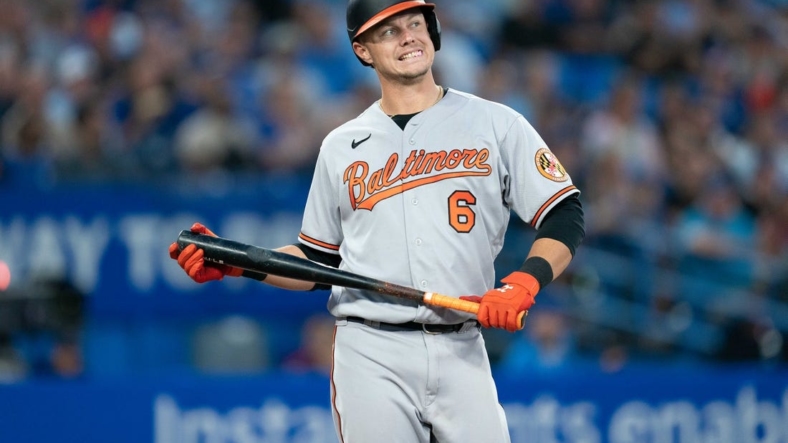 It has been a tale of two seasons for Baltimore first baseman Ryan Mountcastle, who looks to break out of an extended slump when the Orioles continue their three-game series against the host Cleveland Guardians on Wednesday.

The Orioles were held to one hit in the series opener on Monday, a single by Ramon Urias in the second inning.

Baltimore has scored three or fewer runs in their last four games and could use a boost from Mountcastle, who hit .273 with 14 homers before the All-Star break.

Since then, Mountcastle is batting .172 (22-for-128) with four homers. He was moved down to seventh in the order for the first time this season on Tuesday and went 0-for-1 with a sacrifice fly and a walk.

“I’m just trying to take some pressure off him,” Orioles manager Brandon Hyde said. “He’s scuffling lately, overswinging, trying to do too much. I’m trying to give him a little bit of a breather.”

Cleveland is 14-7 in its last 21 games and received another stellar pitching performance on Tuesday, when Cal Quantrill combined with three relievers for the one-hitter.

The Guardians bullpen has not allowed an earned run over its last 30 1/3 innings dating back to Aug. 15. Right-hander James Karinchak has a 21-inning scoreless streak across his last 19 appearances.

Baltimore will send right-hander Jordan Lyles (9-9, 4.45 ERA) to the mound on Wednesday. He received a no-decision after allowing two runs (one earned) on nine hits over seven innings against the Chicago White Sox on Thursday.

Lyles, 31, is enjoying a career resurgence after struggling in the past two seasons with the Texas Rangers. He owns a 3.95 ERA with a 24-to-5 strikeout-to-walk ratio in his last five starts across 27 1/3 innings.

“It’s a lot of fun,” Lyles said. “Just showing up to the ballpark late in the season knowing you’re playing for something is special. It makes it very fun and easy to come to the ballpark every day. You can’t wait to get there. These guys are just so enjoyable to be a part of.”

Lyles, who needs one strikeout to reach 1,000 in his career, has gone 1-1 with a 7.59 ERA in two career starts against Cleveland.

The Guardians will counter with right-hander Triston McKenzie (9-10, 3.17), who yielded three runs over six innings in a 3-1 loss to the Seattle Mariners on Thursday.

McKenzie, 25, has gone 2-3 in his last five starts despite posting a 2.94 ERA across 33 2/3 innings. He drew praise from Seattle outfielder Mitch Haniger following last week’s outing.

“He’s got good stuff,” Haniger said. “He’s got a good riding fastball. He’ll throw some really good sliders, and as a hitter, you just want him to miss middle-middle with it and try to put a good swing on it. He’s got that big 12-6 curveball too, so I definitely see why he’s been good all year.”

McKenzie is facing Baltimore for the second time this season after allowing five runs over seven innings in a 5-4 loss on June 4.