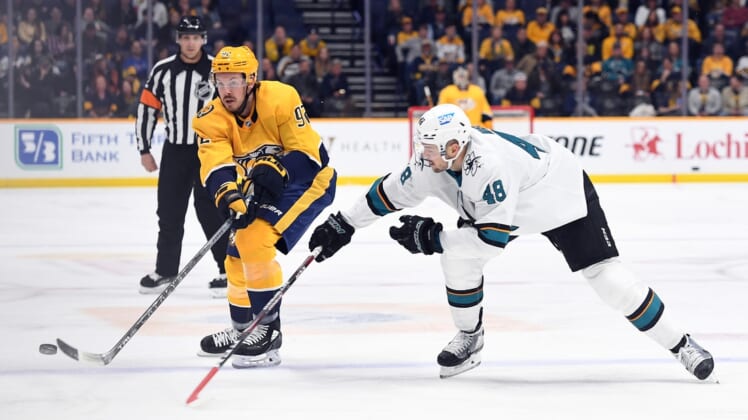 Ryan Johansen scored at 3:18 of overtime to give the Nashville Predators a 1-0 win against the visiting San Jose Sharks on Tuesday.

Johansen sent a pass from along the goal line to the front of the net, where teammate Mattias Ekholm was waiting, but the puck was ruled to have gone in off a San Jose defender.

The Predators pushed the pace from the opening period, jumping out to a 7-2 shot advantage past the midpoint of the first frame en route to outshooting the Sharks 11-5 in the period.

They continued that in the second period, tossing 15 pucks on Kahkonen.

San Jose had one of its best chances nearly six minutes into the second period when Rudolf Balcers skated in on a breakaway but was denied by Saros.

The Predators appeared to take a 1-0 lead at 13:29 of the second period when Filip Forsberg tipped in a point shot by Roman Josi. The Sharks challenged for offside, and after a video review, the goal was overturned.

San Jose’s Tomas Hertl nearly ended the game just over a minute into overtime. After Nashville’s Matt Duchene lost handle of the puck at the crease in front of Kahkonen, Hertl took the puck the other way, but Saros stayed with him to hold him off.

The Sharks, who are on the brink of elimination from the playoff race, visit the Chicago Blackhawks on Thursday. The Predators, who opened a five-game homestand on Tuesday, face the Edmonton Oilers on Thursday.