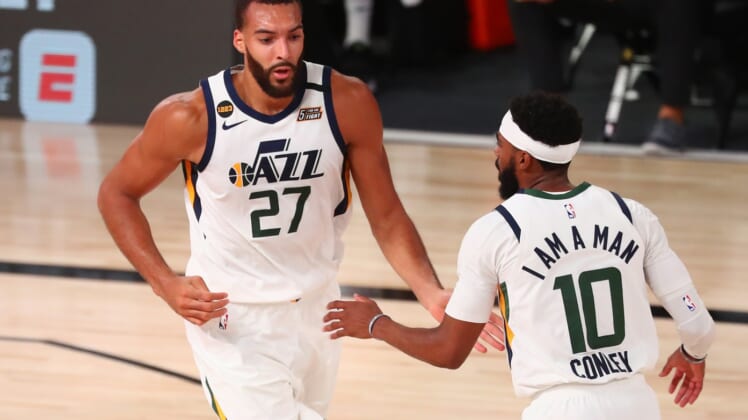 Sep 1, 2020; Lake Buena Vista, Florida, USA; Utah Jazz center Rudy Gobert (27) celebrates with guard Mike Conley (10) after dunking against the Denver Nuggets during the first half of game seven of the first round of the 2020 NBA Playoffs at ESPN Wide World of Sports Complex. Mandatory Credit: Kim Klement-USA TODAY Sports

Rudy Gobert will be staying with the Utah Jazz for years to come, signing a five-year contract extension that makes him the highest-paid center in the NBA.

Less than a month after the Jazz signed star guard Donovan Mitchell to a max contract extension, the team keeps its core intact with a record-setting deal for Gobert.

As first reported by ESPN’s Tim McMahon, Gobert is signing a five-year extension worth $205 million. The max contract, which includes a fifth-year player option, immediately becomes the biggest for a center in NBA history.

Gobert is coming off his first All-Star appearance in 2022. A two-time NBA Defensive Player of the year and four-time All-Defensive First Team selection, the 28-year-old is widely recognized as one of the league’s best defenders.

Across 68 games in the 2019-’20 season, Gobert averaged 15.1 points, 13.5 rebounds and 2.0 blocks per contest. While his primary skill is securing the paint, Utah’s 7-foot-1 center is also an efficient scorer. In the last four seasons, Gobert boasts a staggering 66.3% shooting percentage.

This is an incredible moment for Gobert, who came into the league as the No. 27 overall pick in the 2013 NBA Draft.

Months after he tested positive for COVID-19, leading to the NBA suspending operations for months, Gobert is now locked in as an integral part of his team’s future.