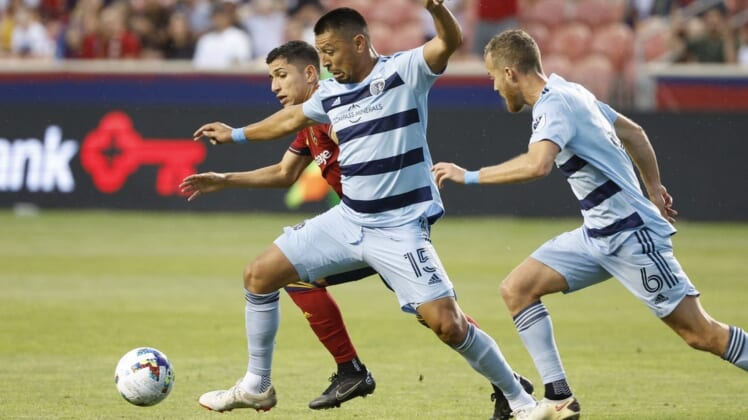 Salt Lake (9-6-6, 33 points) snapped a four-match winless streak. The Utah club climbed into third place in the Western Conference with its first victory in a month. Zac MacMath earned his eighth clean sheet of the season.

Kansas City (5-12-5, 20 points) capped a three-game road swing with a loss — its only defeat during the road trip. Sporting KC struggled to contain Salt Lake’s offense after a second-half red card gave RSL a man advantage over the final 28 minutes.

Salt Lake scored goals on three of four shots that it put on frame after halftime and finished with a 19-6 advantage in total shots.

Kansas City goalkeeper John Pulskamp tallied six first half saves to keep Salt Lake off the board before halftime. It helped Sporting KC survive a half where Salt Lake had a 9-3 advantage in total shots and a 6-1 edge in shots on goal.

RSL broke through on Cordova’s goal in the 50th minute. Andrew Brody saved the ball from the end line and crossed it back to the center of the box. Cordova dove to meet the ball and headed it home for his fourth goal of the season.

A second header from Cordova just bounced wide of the near post in the 56th minute.

Kansas City played with 10 men over the final half hour of the match after Roger Espinoza was sent off with a straight red card in the 62nd minute.

Salt Lake cashed in on the red card immediately. Ruiz threaded a left footer from the top of the box inside the far post in the 64th minute to extend the lead. Savarino laid off the ball to Ruiz to set up the goal.

Savarino added a goal in the 71st minute. Justin Meram sent a cross to Savarino, who was unmarked in the 6-yard box. He sent home a point-blank header for his fourth goal of the season.