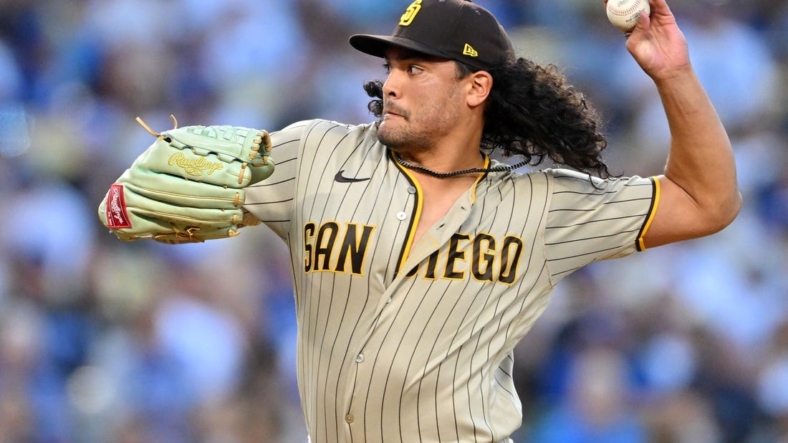 Almost a decade ago, when the Royals had called up much of their future core of players who led them to back-to-back American League championships and the 2015 World Series title, two other prospects who played a big role in those championships were at various stages of their careers even though neither ever played for Kansas City.

On Sunday, one of those prospects, Sean Manaea, will take the mound for the San Diego Padres in the final contest of a three-game series in Kansas City.

Wil Myers, the other aforementioned prospect, likely will be in the Padres’ lineup as well. Myers played right field Friday night and first base Saturday night. He has gone 4-for-8 in the series, with three runs and five RBIs.

The Padres will go for the sweep after taking Saturday’s game 4-3. Yu Darvish survived a shaky start to go seven innings for the win. He pitched into the sixth for the 23rd time in 24 starts this season.

Manaea was selected by the Royals in the first round of the 2013 draft. He was sent to the Oakland A’s in the trade that brought Ben Zobrist to Kansas City for the stretch run in 2015. Manaea made his major league debut in 2016 and pitched for Oakland for six seasons before joining the Padres in a trade before the 2022 season.

Manaea has faced the Royals three times in his career, going 2-0 with a 3.63 ERA.

Myers was selected in the third round in 2009 and was considered the Royals’ top prospect after players such as Eric Hosmer, Mike Moustakas and Salvador Perez had made their debuts.

Myers was traded following the 2012 season to Tampa Bay along with pitchers Mike Montgomery and Jake Odorizzi in the deal that brought pitchers James Shields and Wade Davis to Kansas City.

Shields helped the Royals reach the 2014 World Series, and Davis closed the clinching Game 5 of the 2015 Series.

Now Manaea and Myers can look across the diamond at what the Royals hope will be the core of their next championship push. Eleven different Royals have made their debut in 2022.

“When I was in this organization, there were a lot of prospects,” he said. “It was more than just me. There was Hosmer, Moustakas, Salvy. As a young guy, you’re just playing your game. Jake, Monty and I were the ones who went to Tampa to help turn things around here. It worked out pretty well.”

Almost 10 years after leaving the organization, coming to Kauffman Stadium is no big deal for Myers.

“I’m just here playing in the big leagues against the organization that drafted me,” he said.

Heasley is playing for a Royals organization that took him in the 13th round of the 2018 draft. He made his debut last season and has struggled with his control this season, leading to his 1-7 record. He has never faced the Padres.

He took a no-decision in his most recent start, against Arizona on Tuesday, when he allowed no runs, four hits and four walks in 4 2/3 innings. He also threw up three times before leaving the game.

It’s been a malady that has affected Heasley for as long as he can remember. When he played high school football in Texas, he said he regurgitated before every game.

“Nothing I can do to stop it,” he said. “Just kind of hits me sometimes. It’s a mix of adrenaline and everything.”