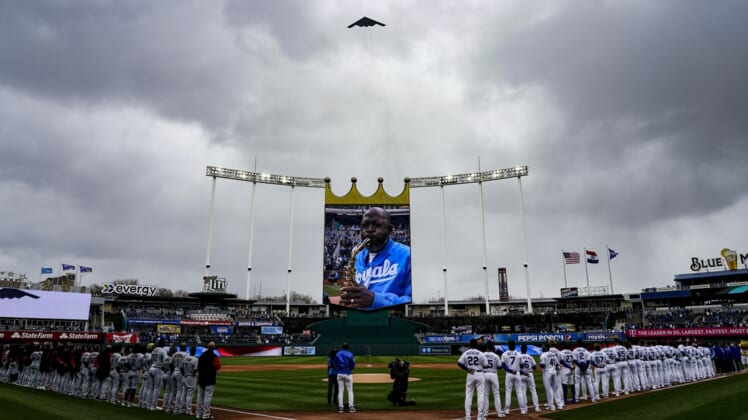 Bobby Witt Jr. made his major league debut even more memorable with a two-out, go-ahead double in the bottom of the eighth, as the Royals defeated the Cleveland Guardians 3-1 on a cold, blustery day in Kansas City. The temperature at the start of the game was 47 degrees, with a wind chill in the upper 30s.

Scott Barlow picked up the win for the Royals with two scoreless innings. Triston McKenzie took the loss, despite three solid innings of relief for the Guardians.

Michael A. Taylor led off the eighth inning with a walk and Nicky Lopez bunted Taylor to second. After Whit Merrifield struck out, Witt pulled a hanging slider into left field to drive in Taylor with the go-ahead run.

Witt then scored an insurance run on a single up the middle by Andrew Benintendi.

Opening Day was a matchup of former American League Cy Young Award winners. Cleveland’s Shane Bieber won it in 2020, while Zack Greinke won it in 2009 in his first tour with the Royals.

Neither starter factored in the decision. Bieber allowed one run on three hits in 4 2/3 innings, walking none and striking out four. Greinke lasted 5 2/3 innings, allowing one run on five hits with a walk and a strikeout.

The Royals have never beaten Bieber, who has won all four of his decisions against Kansas City.

Witt, one of baseball’s top prospect, hit a flyball to right field in his first at-bat and it was caught by Steven Kwan, who was making his less-heralded debut.

The Indians got on the board first in the fourth inning. Myles Straw led off the inning with his second single — and the Guardians second hit — and then stole second base. One out later, Jose Ramirez drove in Straw with a double to short left-center field.

The Royals responded with a run in the fifth. Hunter Dozier led off with a double that eluded left fielder Amed Rosario in the wind. Lopez drove in Dozier with a two-out drive to left center that fell between Rosario and Straw. That ended Bieber’s day.