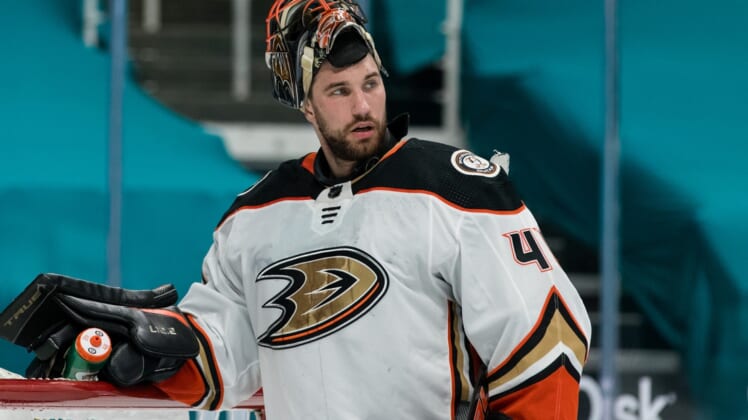 Anthony Stolarz made a career-high 46 saves in his third start of the season as the visiting Anaheim Ducks defeated the San Jose Sharks 4-0 on Monday.

The save total was the highest in franchise history during a shutout. The old mark of 45 saves was set by Dominic Roussel in a 1-0 road win over the Colorado Avalanche on Dec. 22, 1998.

Stolarz earned his first shutout since a 1-0 win against the visiting New York Rangers on Jan. 29, 2019, when he played for the Philadelphia Flyers, and the third of his NHL career. He has made 20 NHL starts spread over four seasons while appearing for Philadelphia, Anaheim and the Edmonton Oilers.

Alexander Volkov scored two goals and Max Comtois had a goal and an assist for the Ducks. Rickard Rakell also produced a goal. Martin Jones made 17 saves for the Sharks.

The Canadiens snapped their three-game losing streak and improved their record to 2-3-1 against first-place Toronto this season. Goaltender Jake Allen stopped 23 of 25 shots and won for just the second time (2-5-4) in his past 11 games.

The Leafs took their first regulation loss in 11 games (9-1-1) and saw their six-game winning streak end. Campbell stopped 21 of 24 shots but saw his NHL-record streak of 11 consecutive victories to begin a season come to an end.

Brandon Hagel scored 1:25 into overtime as Chicago beat host Columbus for a fifth straight time to move within two points of a playoff spot.

Amid a three-on-two situation, Hagel took a pass from Kirby Dach and drilled the puck past Columbus netminder Joonas Korpisalo for the winner. It was the Blackhawks’ second victory in three nights at Columbus, and it moved them two points behind Nashville for the fourth and final playoff spot in the Central Division.

Duncan Keith, Philipp Kurashev and Brett Connolly also scored for the Blackhawks, and Patrick Kane had two assists. Patrik Laine had two goals for Columbus while Stefan Matteau added one.

Alex Tuch scored the go-ahead goal on an end-to-end rush early in the third period as Vegas rallied from a two-goal deficit to win at Los Angeles.

Mark Stone had a goal and an assist and Nicolas Roy and Max Pacioretty also scored for the Golden Knights, who won their third consecutive game. Shea Theodore had two assists, and goaltender Robin Lehner made 26 saves.

Adam Erne and Filip Zadina scored goals early in the third period and Detroit held on to defeat Carolina in Raleigh, N.C.

Red Wings goalie Jonathan Bernier, who made 37 saves, was nearly six minutes away from his first shutout of the season before the Hurricanes scored. Erne posted his 11th goal of the season 24 seconds into the third period Monday. Erne has five goals in the past seven games.

The Hurricanes made it interesting thanks to Nino Niederreiter’s goal with 6:06 remaining before Sam Gagner scored an empty-netter late.

Mikko Rantanen had two goals, Nathan MacKinnon added a goal and an assist, and Colorado held on to beat Arizona in Denver.

Brandon Saad also scored, Cale Makar had two assists and Philipp Grubauer stopped 35 shots for the Avalanche, who are 16-1-2 since March 10.

Michael Bunting and Johan Larsson scored goals and Ivan Prosvetov made 16 saves for the Coyotes, who have lost four in a row.

Kyle Connor and Nikolaj Ehlers replied for the Jets, who had their three-game winning streak snapped. Connor Hellebuyck stopped 20 shots, but his glaring miscue led to the game-winner.

With the score tied just past the midway point of the final frame, Hellebuyck mishandled Thomas Chabot’s long, bounding dump-in right to him. Dadonov chipped the loose puck into the net for his 12th goal of the season.