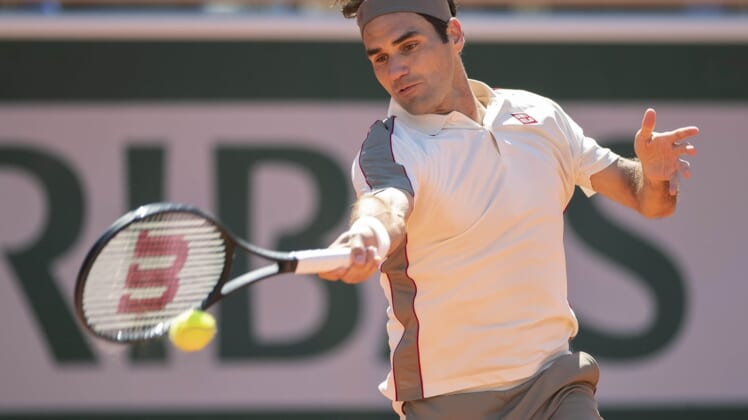 Roger Federer made his return to the Grand Slam stage in fine fashion Monday, breezing past qualifier Denis Istomin of Uzbekistan 6-2, 6-4, 6-3 to advance to the second round of the French Open in Paris.

The 20-time Grand Slam winner and the No. 8 seed at Roland Garros was appearing in his first major since the 2020 Australian Open. Federer took the rest of the year off as he recovered from two knee surgeries and was playing in just his fourth match of the season.

Federer’s win Monday come on the strength of his serve, winning 80 percent (37 of 46) of points on his first serve and 79 percent (15 of 19 on his second serve.) The Swiss great didn’t face a break point on his serve, and he capitalized on five of 13 chances to break Istomin.

Federer has won the French Open once, in 2009, and should he do so this year, he will be the only player to have won each Grand Slam championship at least twice. He has eight Wimbledon, six Australian Open and five U.S. Open titles.

While Federer was the big name in action, the match of the early round on Monday belonged to Italian teen Jannik Sinner and Frenchman Pierre-Hugues Herbert. They battled just over 3 1/2 hours before Sinner prevailed 6-1, 4-6, 6-7 (4), 7-5, 6-4.

The 19-year-old Sinner won a five-set contest for the first time in his career after saving match point at 4-5 in the fourth set. That was the first of five straight games he won in his comeback victory.

“When I saw the draw and his name, I knew it would be tough,” said Sinner, the No. 18 seed. “I knew the crowd was for him, but thank you for coming out to support us. It’s a crazy sport and today I am happy it went my way. I have survived and happy to be in the next round. It was tough.”

Sinner had 43 winners against 36 unforced errors, while his opponent hit 58 and 62, respectively.

Russian Daniil Medvedev, the No. 2 seed, needed just less than two hours to oust Kazakhstan’s Alexander Bublik 6-3, 6-3, 7-5 and advance to the second round. It was the first win in five attempts at Roland Garros for Medvedev, who had a 1-3 record in the clay-court tune-ups before arriving in Paris.

A pair of seeded Americans, No. 31 John Isner and No. 32 Reilly Opelka, also advanced.

No. 28 Nikoloz Basilashvili of Georgia was a winner in four sets over Serb Dusan Lajovic, but No. 26 Lorenzo Sonego of Italy fell to Lloyd Harris of South Africa in straight sets.