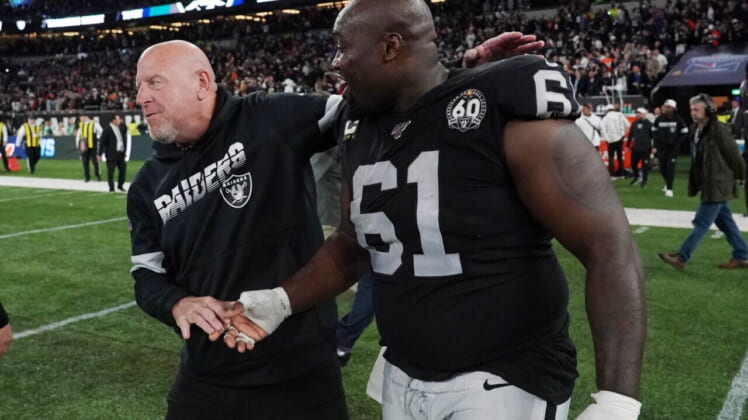 A day after reports Las Vegas Raiders Pro Bowl center Rodney Hudson reportedly asked for and was granted his release, the team trades the veteran to Cardinals for a third-round draft pick. The Raiders bolstered their offensive line resigning Richie Incognito to a 2-year deal.

As the NFL new year officially kicked off with a flurry of moves around the NFL, yesterday’s news of the release of Las Vegas Raiders Pro Bowl center Rodney Hudson was a shocker for most observers. It makes a little more sense as Las Vegas ends up trading their offensive line anchor to the Arizona Cardinals for a reported third-round draft pick, also sending a draft pick to Glendale as well.

NFL Network’s Mike Garafolo first reported the deal as the moves around the NFL begin to stack up. Other reports indicate the Raiders included a seventh-round pick going to Arizona in the Hudson deal.

The Raiders have reshuffled their offensive line in recent weeks via trade and release, and on Tuesday they were at it again. Three-time Pro Bowl center Rodney Hudson was the next domino to fall as the Raiders were set to release him but found a taker via trade in the Cardinals. The Raiders scuttled their offensive line over the past two weeks releasing veteran guard Gabe Jackson and trading right tackle Trent Brown to the New England Patriots.

With all of the goings on the Raiders’ offensive line, they tied up a familiar face as the team has resigned guard Richie Incognito. Incognito reportedly signed a deal worth $2.6 million, with $1.1 million guaranteed.

Incognito was out most of 2020 with an Achilles injury but has worked back into playing shape and his signing was sorely needed as the Raiders piece together an offensive line after the latest moves.

As of today, the moves mean the Raiders potential starting lineup on the offensive line looks like this:

Reports late Wednesday indicate despite the Raiders intention of releasing guard Gabe Jackson, they may be attempting to move the veteran much like they did with Hudson.