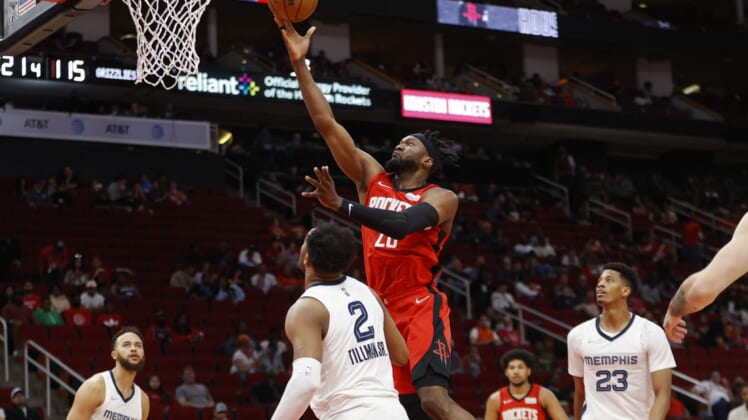 It’s assuredly a greater reflection of the Memphis Grizzlies’ depth of talent that they improved to 14-2 without All-Star guard Ja Morant with their 122-98 road win over the Houston Rockets on Sunday, but to a lesser extent, there is something to be gleaned about their opponents as well.

Even with Morant sidelined by knee soreness, the Rockets mustered precious little defensive fight against Memphis, allowing the Grizzlies to connect on 16 of 34 3-pointers, a robust figure for a team that entered the contest ranked 24th in the NBA shooting 34.2 percent from behind the arc. Memphis had its way in transition with 25 fast-break points as well as behind the line, as Houston allowed a less-than-average shooting performance impact the effort delivered on the other end of the court.

“We’ve been doing that a lot this season, getting frustrated with our offense and letting it creep into the defense,” Rockets coach Stephen Silas said. “Obviously we didn’t shoot the ball well but we have another opportunity to fix it.”

That next opportunity will come quickly, with the Rockets hosting the Washington Wizards on Monday in the second half of a back-to-back. Mired in last place in the Western Conference and saddled with the worst record in the league, Houston has attempted to make the most of these opportunities for growth and development, and to capitalize on chances to showcase its character.

“Hopefully this is a learning moment and we do better (Monday).”

The Wizards are in a situation similar to that of Houston. Washington had dropped six consecutive games, three by double-digit margins, before parlaying a fourth-quarter rally into a 127-119 home win over the Los Angeles Lakers Saturday. The Wizards trailed by as many as 16 points.

“It was encouraging but I don’t want to jump ahead of myself (with) the fact that it was one game,” Wizards coach Wes Unseld Jr. said. “We were desperately in need of a game like this so that’s great, but we have to do that consistently. That’s what we’re looking for, a level of consistency. Not only on the offensive end but defensively, can we sustain play for as close to 48 minutes as possible.”

The Wizards benefited significantly from the play of their reserves, with Deni Avdija and Daniel Gafford scoring 17 points apiece while Tomas Satoransky totaled 16 points and six assists off the bench. Avdija added four rebounds and four assists and Gafford six rebounds to help fill the void left by the absence of Kyle Kuzma, who was a late scratch with right knee tendinitis.

“Everyone who went out there gave us something,” Unseld said. “And that’s how it has to be.”

Kuzma is expected to be available against the Rockets.