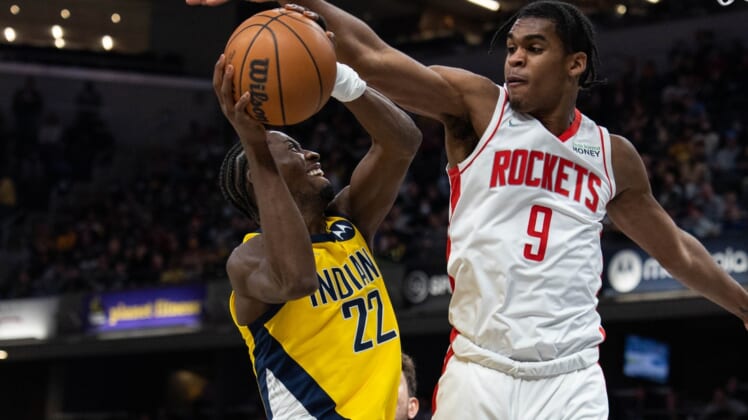 For every moment of inspiring spirit and irrepressible verve Houston showcased Wednesday against the Western Conference-leading Phoenix Suns, the Rockets mixed in an equal number of blown defensive assignments that rendered their vigor on the offensive end moot.

The Rockets know they have work to do defensively when they host the Indiana Pacers on Friday, having lost 20 of their last 23 games.

During that dismal stretch, the Rockets (17-52) have showcased pockets of persistence offensively. That held true against the Suns when Houston overcame double-digit deficits in both halves before finally yielding down the stretch of the third quarter after briefly securing the lead.

According to NBA.com, the Rockets entered Thursday last in the league in defensive rating, surrendering 116.5 points per 100 possessions, thus their struggles in their 129-112 home loss to the Suns were par for the course.

However, the wild fluctuations the Rockets display defensively remain mystifying, particularly during those games when their offense is clicking.

The Suns shot 55.8 percent overall, including a robust 57.1 percent in a second half that featured 11 of 23 3-point shooting. Phoenix All-Star guard Devin Booker scored 15 of his game-high 36 points in the Suns’ 36-point third quarter, a period that offered a glimpse of the Rockets’ defensive woes. Booker, and the plentiful open looks he received, was central to what ailed Houston.

Interestingly, the end of the court the youthful Rockets defended played a role in their collapse.

“We just weren’t early enough, we weren’t recognizing early enough,” Rockets coach Stephen Silas said. “In the first half our defense was in front of us and we could help them through with our communication from the bench. I told them at halftime, ‘You’re not going to have us to help you on that end of the floor, so it’s going to be your communication that’s going to get you through.’

“And we did have some breakdowns in our communication which led to open shots, open rolls.”

The Pacers (23-47), losers of seven of 10, decided to shut down forward T.J. Warren for the remainder of the season despite his having recovered from a stress fracture in his foot. Warren has played just four games combined over the last two seasons and is just one name on an extended injury list that also includes Myles Turner (foot), T.J. McConnell (knee) and Goga Bitadze (foot).

Short-handed, Indiana absorbed a 135-102 home loss to the Memphis Grizzlies on Tuesday.

Having leaned fully into a rebuild, the Pacers saw in Memphis what successful roster-building can yield with supreme patience. The trade deadline yielded promising guard Tyrese Haliburton from the Sacramento Kings, and he is averaging 18.5 points and 9.4 assists with Indiana.

But the Pacers realize they will need multiple pieces around Haliburton to get to where Memphis is currently.

“What they’re building there is what we’re building here,” Pacers coach Rick Carlisle said. “They’re ahead of our schedule at this moment but this is the direction that we’re going to take this and going through nights like this is a part of it, unfortunately.”