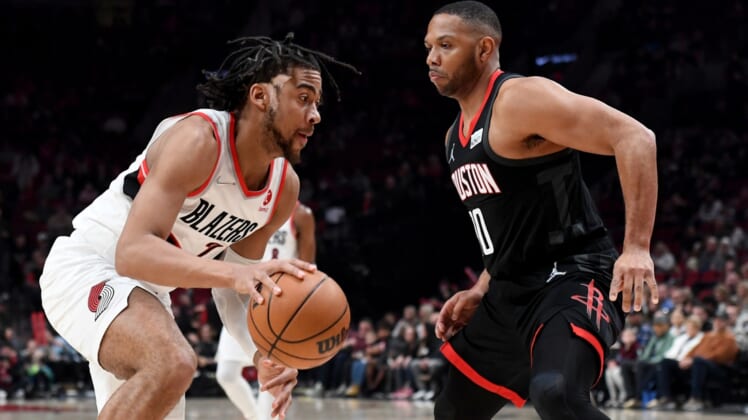 Jae’Sean Tate added 17 points and Kenyon Martin Jr. tallied 16 for the Rockets, who never trailed while easily handling the Trail Blazers in the first of back-to-back meetings between the teams. They meet again Saturday night in Portland.

Houston’s road win was its first since upsetting the Utah Jazz on Jan. 19. The Rockets are 8-30 in away games.

Trendon Watford recorded 19 points and six assists and Drew Eubanks scored 18 points for the Trail Blazers (27-46), who lost for the 12th time in their past 14 games. Ben McLemore scored 15 points, CJ Elleby added 14 points and seven rebounds, and Kris Dunn had 12 points and seven assists for Portland.

The Trail Blazers have dropped 19 of their past 26 home games after opening the season with a 10-1 stretch.

The Rockets made 51.8 percent of their field-goal attempts, including 19 of 45 from 3-point range, while dispatching Portland for just the second time in the past nine meetings. Green made five treys.

The Trail Blazers shot 50.6 percent but were a shaky 3 of 20 from behind the arc. Keon Johnson added 10 points for Portland.

Houston scored the game’s first eight points and led 28-10 after Tate’s fast-break layup with 4:11 left in the first quarter. The Rockets led 35-22 at the end of the stanza.

Houston’s lead reached 20 for the first time when Alperen Sengun split two free throws with 5:46 left in the half to make it 58-38. Portland trimmed its deficit to 66-53 at the break.

The Rockets pushed their lead back to 20 on Tate’s 3-pointer with 9:33 left in the third quarter.

Nearly four minutes later, Wood’s layup gave Houston an 89-65 lead, but the Trail Blazers responded with a 17-4 run to pull within 11 before Green buried a 3-pointer as time expired to give the Rockets a 96-82 lead entering the final stanza.

Christopher opened the fourth quarter with consecutive 3-pointers to restore Houston’s 20-point lead, and the Rockets cruised to the finish.