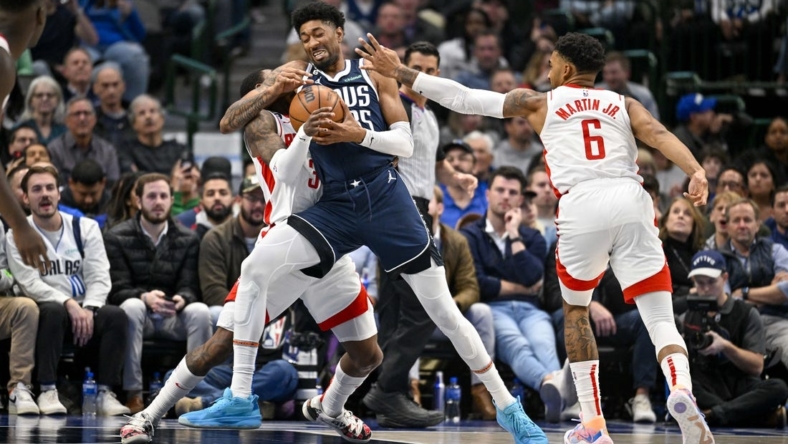 The Rockets snapped a three-game skid despite committing a whopping 23 turnovers that Dallas, playing without Luka Doncic (rest), converted into 25 points. They helped their cause by recording 19 blocks, the highest total in the NBA this season and one shy of the franchise mark.

Houston also found some answers on the offensive end late, with Porter hitting a floater for a six-point lead with 1:33 left before reserve Usman Garuba (12 points, nine rebounds) fed Eric Gordon for a corner 3-pointer that sealed the victory with 57.2 seconds remaining.

Porter added 11 rebounds, eight assists and three blocks to his ledger while Green had seven boards and six assists. Each of them committed five turnovers.

Tim Hardaway Jr. and Christian Wood scored 28 and 26 points, respectively, off the Dallas bench. The Mavericks shot 30.4 percent overall and did not have a starter score in double figures.

For every Rockets run, the Mavericks fashioned a response. Gordon gave Houston its largest lead at 64-55 at the 8:51 mark of the third quarter, only for Dallas to answer with an 11-0 run ignited by a Hardaway 3-pointer. But the Rockets kept plugging away despite their litany of unforced errors, including back-to-back shot-clock violations that concluded the third period.

After getting just 15 points from their bench, all from Wood, in a Tuesday win over the Los Angeles Clippers, the Mavericks tallied 19 bench points in the first quarter on Wednesday. However, Dallas opened 0-for-7 from the floor and trailed by as many as eight before cutting that margin to 31-28 entering the second.

Dallas finally took its first lead when Dwight Powell converted a second-chance basket into a 36-35 advantage at the 10:07 mark of the second. The pendulum swung back and forth for the remainder of the half, with the Mavericks turning an 11-0 run featuring 3-pointers from Facundo Campazzo, Wood and Dorian Finney-Smith into a 51-42 lead before Houston responded in kind.

The Rockets closed the half with a 15-0 surge that included eight points and two 3-pointers from Garuba and a buzzer-beating 3-pointer from Green that gave Houston a 57-51 halftime lead.