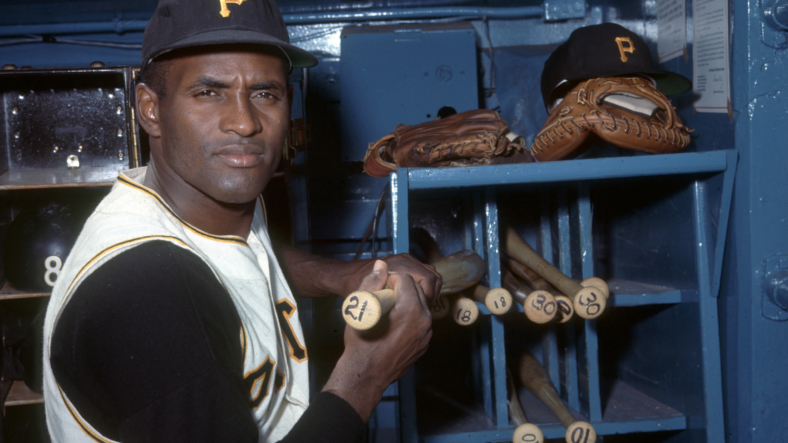 Roberto Clemente and Robert Shelling never crossed paths. They are from different generations. One was an all-time great baseball player. The other has a memorabilia collection that would make sports fans around the world envious.

This is their story and how they just so happen to be linked a half-century after Clemente collected his now-famous 3,000th hit on Sept. 30, 1972 against New York Mets pitcher Jon Matlack at the old Three Rivers Stadium in Pittsburgh in what was Clemente’s last official MLB at-bat.

It was years back that Shelling eyed himself a certain baseball bat made available by a reputable national auction house. Unlike others who would bid on the bat, Shelling knew its history.

As Shelling described, “every bat has different grains to it, almost like a fingerprint.” The old 36.5”, 37.2 oz, Hillerich & Bradsby, which had been worn down by use decades earlier, had its own unique markings that traced all the way back to an unforgettable day in baseball history.

This ended 50 years of controversy over the bat Clemente used for his 3,000th hit, just months before the 38-year-old tragically passed away while on a humanitarian mission to help provide aid to those impacted by an earthquake in Nicaragua.

The bat Shelling bid on (and won) was in fact the one Clemente used when he hit that magical milestone in front of a scarce crowd at Three Rivers north of 20 years before the historic venue was imploded.

Resolution Photomatching, the same outlet that verified Diego Maradona’s “Hand of God” jersey before it sold for a record $8.9 million, authenticated that this was indeed the bat Clemente used on that fall day in Pittsburgh.

How did Shelling know this was actually the bat Clemente used before sending it in for verification? Also, how did he know it was the same bat used in the game versus the one he was photographed with after the game? Well, it’s rather simple.

“The wood grains line up perfectly. Also, if you look at the 3000th-hit bat post game photo carefully near his fingers, you can see a 1.5” black hashmark. You can also see it in the photos taken during the hit. This is among several other distinguishing unique features of the grain of the bat,” Robert Shelling told Sportsnaut.

“No bat is going to have a black streak like this randomly at the same spot ever, let alone the same day.”

‘In another photo of him with a finished swing, you can see the barrel. It is the same bat he is using during the hit as well as he’s holding after the game,” Shelling noted.

Related: Remembering the legacy of Roberto Clemente and a lasting impact beyond 3,000 hits

It’s a story that has been five decades in the making. Multiple individuals in the past claimed to have owned Clemente’s historic bat.

ESPN’s Kevin Guilfoile penned a long-form piece back in 2012 in an attempt to solve this decades-long mystery. He didn’t come too close to answering the question — giving us a ton of information behind the mystery in the process. Three different stories. Three different bats. Five decades of mystery.

It started out with Kevin’s father, Bill. The older Guilfoile began as the Pirates’ public relations director back in 1970, and was on hand when Clemente collected his 3,000th hit. Clemente ultimately handed over the bat he used for the historic hit to Guilfoile — A Lousiville Slugger with “21” scribbled on the knob. Guilfoile packed it up and sent the bat to the Baseball Hall of Fame. End of story, right? Not even close.

The Louisville Slugger with that No. 21 scribbled on the knob that headed to Cooperstown was located just outside of Mr. Guilfoile’s office when he took a job with the Baseball Hall of Fame. He passed it several times per day during his time with the museum. It was obviously the bat that had been handed to Bill from Clemente when the all-time great collected his 3,000th hit. As the story continued to develop, this proved to be far from the case

Former Pirates general manager Joe Brown gave Bill Guilfoile a Clemente bat several years after the Hall of Famer died. The Adirondack model bat with “37” inscribed at the handle to take into account its weight. The older Guilfoile had been working at the Hall of Fame for a decade when his friend, Tony Bartirome, came to Cooperstown for a visit. When visiting the Guilfoile family, the former Pirates infielder noticed Clemente’s Adirondack bat hanging on the wall in their home.

Bartirome concluded that this was the bat that Clemente used to collect his history-making 3000th hit. “That’s impossible. The day he hit 3,000 I went down to the clubhouse, and Roberto himself handed me the bat he used. I sent it to the Hall of Fame. I walk by it every day,” Guilfoile told Bartirome.

Despite this, Guilfoile had sent a memo to the Hall of Fame in response to a claim by a man named Les Banos who also said he had Clemente’s historic bat. In the memo, Guilfoile reiterated that the bat on display in Cooperstown was in fact the real one even after Bartirome claimed that Bill had it.

The younger Guilfoile then attempted to get to the bottom of Banos’ claim, one that came from the Pirates’ team photographer during the Clemente era. He called Bartirome in an attempt to figure out exactly what happened. As Bartirome explained to the ESPN scribe, Clemente had gone to the team’s equipment manager, John Hallahan, to change bats from his normal Louisville Slugger to an Adirondack because the former “didn’t feel right.”

There was somewhat of an issue here in that Louisville Slugger’s parent company, Hillerich & Bradsby, had a contract with Clemente for him to use their bats. Thus, one of the guys in the dugout used a razor blade to remove the ring commonly found on Adirondacks so it would blend in and not be noticed.

As the story goes, Clemente would end up with three bats with him on the on-deck circle immediately before collecting that historic hit — two Louisville Slugger’s and an Adirondack. After conversing with Hall of Famer Willie Stargell, he selected a beat up Hillerich and Bradsby, which coincidentally enough, was used to record his 3000th hit on Sept. 29 before it was ultimately to be taken back after an delayed error was called. The Baseball Hall of Fame has a clean Hillerich and Bradsby. The wrong bat. Guilfoyle’s Adirondack also wasn’t it as all the pictures show him using a Hillerich.

This answered that. The Baseball Hall of Fame had the wrong bat. The Adirondack wasn’t it. Nearly five decades later, and a huge collector of game-used bats would end up with the historic 3000th-hit iteration.

Robert Shelling, his plans for the bat and Roberto Clemente’s legacy

In his interview with Sportsnaut, Mr. Shelling shared some stories about his huge collection of game-used baseball bats dating back to the pre-Clemente era.

I asked Shelling about his favorite bat outside of the Clemente one. His response was rather interesting, and shows that he is indeed an avid collector. “The Miguel Cabrera one. I have been following him since he was in Double-A with the Marlins. You get so overwhelmed with stuff, you don’t even know what you like anymore. Obviously, the Mark McGwire. That was a fun year (1998).”

Sportsnaut then asked Robert what got him into collecting. His answer included a random former MLB catcher and a story from roughly a quarter century before.

Mr. Shelling has an impressive Instagram account that displays some of the hundreds of bats from his collection.

What Mr. Shelling has planned for the Roberto Clemente 3000th-hit bat.

We asked whether he would ever decide to put the bat on display at the Baseball Hall of Fame in Cooperstown. Shelling’s response combined the mystery of the past 50 years with the belief that he might outscource the curation of the bat.

Robert had not planned to go public with this story. He just figured it was time for others to enjoy the historic bat on the 50th anniversary of Clemente’s milestone and unfortunate demise. What happens next is anyone’s best guess.

One of the greatest players of his era, Clemente’s career spanned nearly two full decades. From a little-known outfielder out of Puerto Rico to one of the most recognizable names in the history of the game.

Joining some other all-time greats in leaving this life too early, Clemente left a lasting legacy. He’s still a hero in the Puerto Rico community here in the United States. A giant in neighborhoods spanning Florida, New York and other metropolises that define this community around the country. In death, Clemente was serving those less fortunate than him in a country far from the outfield turf of Three Rivers Stadium. That altruistic mentality has him leaving a lasting legacy on the game and those who are involved in it.

Now that the mystery of his 3000th hit bat has been solved, it’s time to celebrate this legacy 50 years after the fact. Roberto Clemente Day around MLB will be Sept. 15 with the anniversary some two weeks later. We’re sure Robert will be celebrating it, too, getting choked up that he is at least part of Clemente’s story.