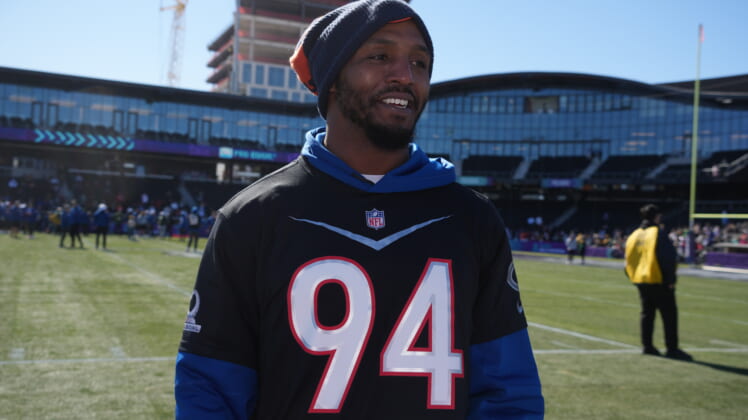 Sacking the quarterback rarely comes easily in the NFL (unless you’re one away from a record). For Chicago Bears pass rusher Robert Quinn, he recorded more sacks during the 2021-22 NFL season than any other player, with 18.5 QB takedowns.

He’s clearly really good at what he does.

Meanwhile, the Chicago Bears? Are not.

This could lead to a trade either this offseason or early in the year once they get off to a miserable start according to Jason La Canfora of CBS.

Robert Quinn gets his wish with trade to Ravens

If Robert Quinn’s top objective is to get back on a competitive team that can slot him into their starting lineup, the Baltimore Ravens have to be an intriguing fit. They still have a need along the edge, even after selecting Odafe Oweh in the first round a year ago and David Ojabo in the second round in April. Ojabo is coming off an Achilles tear at his March Pro Day.

There’s a belief that Ojabo will be able to suit up at some point during his rookie season, but it’s unlikely to be in a featured role. This would allow Quinn to start for at least a year until the team may want to roll out Ojabo full time in 2023.

The biggest hurdle to Quinn landing in Baltimore may be their limited cap space, while keeping Lamar Jackson‘s eventual contract extension on their future radar.

If Eric DeCosta could pull off a trade, he’d be adding an elite player at the top of his game to a Ravens defense that suffered several setbacks a year ago. Maybe Quinn could help them become an intimidating unit once again in 2022.

Cardinals bring in another elite defender

The Arizona Cardinals already have one game-wrecker on their front seven with three-time NFL Defensive Player of the Year in J.J. Watt, why not add another with Robert Quinn?

We saw the Cards struggle at stopping the pass a year ago and without a strong investment into their secondary, there’s no indication their pass defense will allow fewer passing touchdowns than they did in 2021.

One way to potentially offset this is by adding another elite pass-rusher. Quinn certainly qualifies.

Quinn just turned 32, but it’s clear, he’s no worse heading into his 12th season as he was in his third, when he recorded 19 sacks. If the Cards want to add another sack artist, they should look no further than trading for Quinn. Unfortunately, their limited cap space probably makes this a pipe dream, unless a contract extension with Kyler Murray can be reached.

The only team on this list who can easily fit Quinn’s salary under their cap (after trading or cutting Jimmy Garoppolo), the San Francisco 49ers could go back to having one of the most fearful front fours in all of football with one simple trade.

Pairing Nick Bosa with Quinn would cause nightmares for opponents on a weekly basis. With Arik Armstead taking the attention away in the middle, teams would be faced with an impossible decision on who to double.

Dee Ford has made it obvious by playing in just seven games the past two seasons, they can no longer rely on his availability going forward. While they have solid depth along the line, helping them finish with the second-most sacks per game a year ago, the 49ers can’t bank on that happening again. But with Quinn, matching their three-sack-per-game average should be achievable once again.