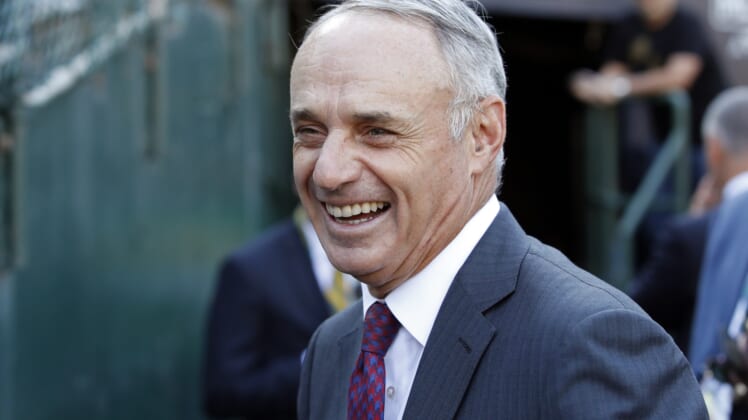 The St. Louis Cardinals haven’t played a game since July 29 due to a massive COVID-19 outbreak in their clubhouse. In a 60-game season with the team quickly falling back in the standings, MLB commissioner Rob Manfred isn’t ready to give up on St. Louis.

Entering Tuesday, the Cardinals have played just five games during the 2020 season and are far back of other NL Central foes like the Chicago Cubs and Cincinnati Reds. Even after MLB canceled the team’s upcoming series against the Detroit Tigers, Manfred remains confident that the Cardinals can have a credible season.

Problems first started for the Cardinals after their series against the Minnesota Twins near the end of July. Hours before St. Louis was set to begin a four-game stand against the Brewers, the game was postponed and the entire team was quarantined after a positive COVID-19 test.

The next day, four more players tested positive for the virus and the rest of the four-game series at Miller Park was postponed. MLB sidelined them for the weekend after 13 total players contracted COVID-19. A few days later, MLB canceled a three-game set against the Cubs due to additional cases.

With players no closer to returning, the league suspended a three-game series against the Pittsburgh Pirates and Thursday’s doubleheader against the Tigers. Yet, despite the team now being sidelined for two weeks, Manfred doesn’t seem worried.

“I absolutely see a path back for the Cardinals,” Manfred said, via interview with The St. Louis Post-Dispatch. “That is dependent on getting enough days with no positives that we’re comfortable that we don’t have any contagion risk. But 100 percent I see a path back.”

Not only does Manfred see a path back for the Cardinals, but he still believes they can have a credible season.

“I think whether you get all the way to 60 or not, that’s difficult at this point,” Manfred said. “I think that they are going to play. I think it’s possible for them to play enough games to be credible, to be a credible competitor this season.”

Keep in mind, the Cardinals’ 2020 schedule is set to end on Sept. 27 against the Milwaukee Brewers with the MLB postseason scheduled to start on Sept. 29.

There are 44 days remaining in the regular season and the Cardinals would need to cram 55 games into that short span. Even with seven-inning doubleheaders, there is likely little chance of that being pulled off.

Ultimately, MLB might need to adapt and just determine the standings off winning percentage. It comes with its own issues and some will question the legitimacy of one team playing fewer regular-season games than all others, but MLB is now out of options.