Rob Manfred ‘not confident’ there will be a 2020 MLB season 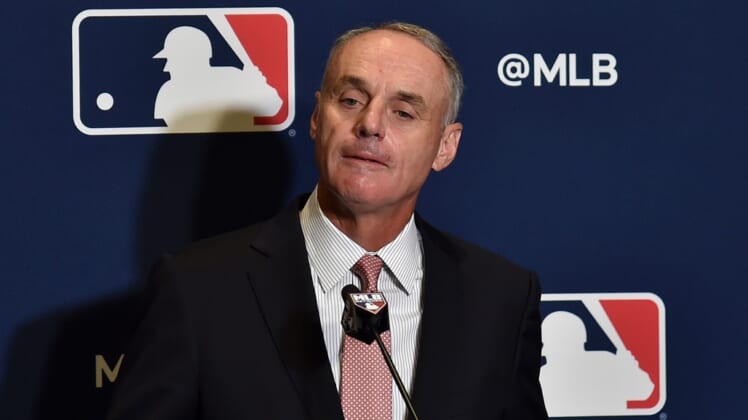 Just five days after MLB commissioner Rob Manfred guaranteed there would be a 2020 season, he is now no longer confident that baseball will be played this year.

Speaking to ESPN’s Mike Greenberg on “The Return to Sports”, Manfred expressed skepticism for the MLB season after guaranteeing baseball would be played this year before the 2020 MLB Draft.

When asked by Greenberg how confident he is that there will be an MLB season, Manfred backpedaled from his guarantee and shifted the blame towards the MLB Players Association for baseball being in jeopardy.

“I’m not confident,” Rob Manfred said, via ESPN. “I think there’s real risk; and as long as there’s no dialogue, that real risk is gonna continue,”

On Friday, the MLBPA rejected a proposal from MLB for a 72-game season. It marked another failed step in negotiations between the two sides, each of which exchanged multiple offers on a plan for the 2020 season.

In March, MLB and the players’ union agreed on a deal that was meant to reshape the 2020 season. Under the pact, players would receive the prorated portion of their 2020 salaries based on the numbers of games played this year. As part of the agreement, Manfred would have the authority to implement a shortened season if both sides couldn’t agree on a firm plan for the 2020 season.

As the COVID-19 pandemic went on, MLB began suggesting its teams would experience a devastating financial blow if they stuck to the agreement. The league suggested it would lose $4 billion if players receive prorated salaries and said that agreement was dependent on fans being able to attend games.

On Monday, Manfred said that owners are very much on board with a plan to provide baseball this year.

However, recent reports have indicated several owners were perfectly willing to shut down the 2020 season.

The league held a conference call with its owners earlier on Monday, where they pushed back on the idea of proposing another offer. They were expected to inform Manfred the direction they wanted to go and the commissioner’s sentiment likely reflects where this is headed.

While the NBA, NHL and WNBA get back on track with plans for their seasons, MLB now seems headed for a lost year. At a time when the sport couldn’t afford to lose fans and was already struggling to increase its popularity, things are about to get even worse.