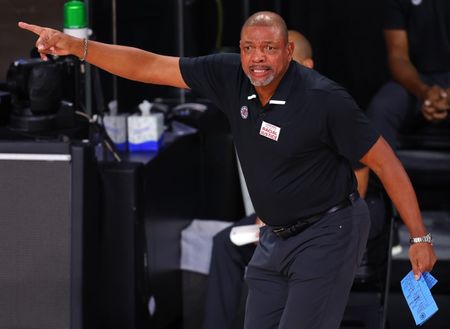 Just days after being fired by the Los Angeles Clippers, Doc Rivers was introduced as the new head coach of the Philadelphia 76ers on Saturday.

Terms were not announced, but ESPN reported Thursday it was a five-year deal.

“We are thrilled to welcome Doc Rivers to Philadelphia as the new head coach of the 76ers. Doc is one of the most respected and accomplished head coaches in the NBA,” 76ers general manager Elton Brand said in a statement.

“I believe Doc can help us unlock our full potential on the floor and further our pursuit of an NBA championship. I also respect and appreciate that his impact extends far beyond the basketball court as he truly embraces the platform he has to drive positive change in society. Doc is a great fit for our team and city, and I’m excited for what the future holds with him as our head coach.”

Rivers interviewed with Brand on Wednesday afternoon before meeting with the team’s ownership that night. Rivers reportedly watched Wednesday night’s Game 1 of the NBA Finals between the Miami Heat and Los Angeles Lakers with the Sixers’ brass.

Rivers was dismissed by the Clippers on Monday, 13 days after the Denver Nuggets overcame a 3-1 series deficit to eliminate the Clippers from the NBA playoffs.

Rivers also experienced some low moments on the way to a 91-89 playoff coaching mark. He was already the only coach in NBA history to blow two 3-1 series leads, and he now has a third such failure on his resume.

The 76ers fired coach Brett Brown on Aug. 24 after seven seasons following their first-round playoff sweep by the Celtics. Brown finished his tenure in Philly with a 221-344 record, plus a 12-14 mark in the postseason.

Former Houston Rockets coach Mike D’Antoni and former Cleveland Cavaliers coach Tyronn Lue were believed to be under consideration for the head-coaching position in Philadelphia.