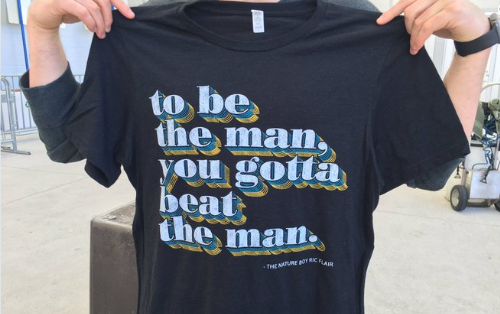 The Jacksonville Jaguars have long struggled to build up a big fan base, but one person who is buying what they’re selling is Ric Flair.

The former wrestling superstar recently underwent surgery but has since made a strong recovery. As evidence of this, Flair sent inspirational T-shirts to the Jags ahead of their Week 4 game against the New York Jets at MetLife Stadium.

Thanks for the shirts, @RicFlairNatrBoy, and glad you're doing better!

Here’s a closeup look at the shirt, which reads, “to be the man you gotta beat the man.”

#Jaguars players and staff are wearing shirts to make you go: "Wooooooo!" Ric Flair sent these because he's a Jags fan. pic.twitter.com/qZcwgSHEDA

Any Jaguars fans that want to get in on this action can buy a shirt by clicking here.