Rex Ryan’s Bills defense could be dumpster fire in 2016 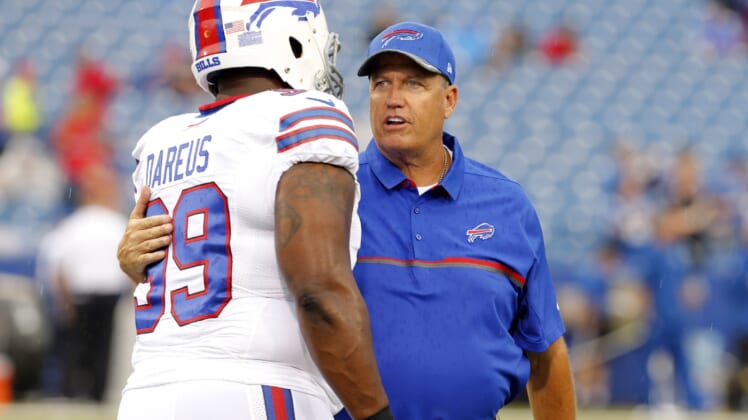 Barring a few minor miracles, it’s beginning to look like Rex Ryan’s defense could be really bad this year for the Buffalo Bills.

News broke on Tuesday that star defensive tackle Marcell Dareus will be suspended for the first four games of the 2016 NFL season after once again violating the league’s drug policy.

It’s his second suspension. He was suspended for one game last year, and it’s been reported by Ian Rapoport that this latest suspension stems from Dareus using marijuana.

Needless to say, the Bills are concerned about his well-being, not to mention their investment. Dareus signed a huge contract extension last year that included a $25 million signing bonus and $60 million guaranteed.

Owner Terry Pegula flew to meet Dareus at his home in offseason Organization had hoped he's turned the corner for good. Bills D in bad shape

At this point, Bills fans must be thinking, “How could things get any worse?”

That’s a foolish question to ask, because things could always get worse, but nobody should fault them for thinking this way.

Ryan engineered a rather tepid defensive effort last season in his first campaign with the Bills. They finished with the league’s 19th-ranked defense in terms of yards allowed and the 15th-ranked scoring defense.

But it was somewhat understandable, as he didn’t have the personnel to run his scheme the way he wanted.

Things were supposed to improve dramatically in 2016.

Ryan brought in his brother, Rob Ryan, and legendary former Baltimore Ravens safety Ed Reed to help him communicate his vision and bring stability to a unit that lacked it last year.

The Bills also invested heavily in shoring up the roster with defensive talent that fit Ryan’s 3-4 scheme, via the draft.

They drafted pass rusher Shaq Lawson out of Clemson in the first round, inside linebacker Reggie Ragland out of Alabama in the second round and defensive end Adolphis Washington out of Ohio State with their third-round pick.

All three were viewed as cornerstone players, not only for this year but for years to come. The “for years to come” angle might still be in play, but of the three, only Washington is available right now. And he’s not expected to be a three-down player for the Bills this year.

Ragland was lost for the season due to an ACL injury, which was a huge blow. He was impressing the heck out of everyone who watched him in camp before the injury.

In his stead, veteran Brandon Spikes was brought back after he missed the entire 2015 season. In no way, shape or form will Spikes be able to fill that void, and he might not even start. Free agent acquisition Zach Brown is the favorite to replace Ragland. Either way, it’s a huge downgrade.

Lawson didn’t make it far into offseason workouts before he hurt his shoulder, requiring surgery. The latest news on this front is that he’s expected back between Week 6-8 after being placed on the PUP list in training camp. Even after he returns, fans should temper expectations, as his rookie campaign might not amount to much after missing so much time.

In one fell swoop, the Bills waived/injured Enemkpali and signed veteran Kroy Biermann, who hasn’t been better than a complementary/rotational guy throughout his career.

Manny Lawson is also dealing with an injury. He is one of the only other reliable pass rushers on the roster other than Jerry Hughes. Until he returns, Lorenzo Alexander is playing opposite Hughes at outside linebacker. He has nine sacks in nine years.

Veteran defensive end Kyle Williams is coming off knee surgery and just recently passed his physical, and there isn’t a ton of reliable depth behind him, either.

You get the picture. Injuries galore have decimated Ryan’s front seven. Thankfully, his talented secondary has (so far) escaped the dreaded injury bug. But even the best secondary units become quite average absent pressure up front.

Losing Dareus is just the cherry on top. Ryan will be juggling players from the get-go this year and will likely be forced to play some out of position, just like he did last year. And last year, the baseline of talent up front exceeded the talent he has to work with right now.

Buffalo’s defense could be a huge liability in 2016, and the offense isn’t good enough to carry the team to the playoffs.

Buckle up, Bills fans. It’s going to be a bumpy ride.