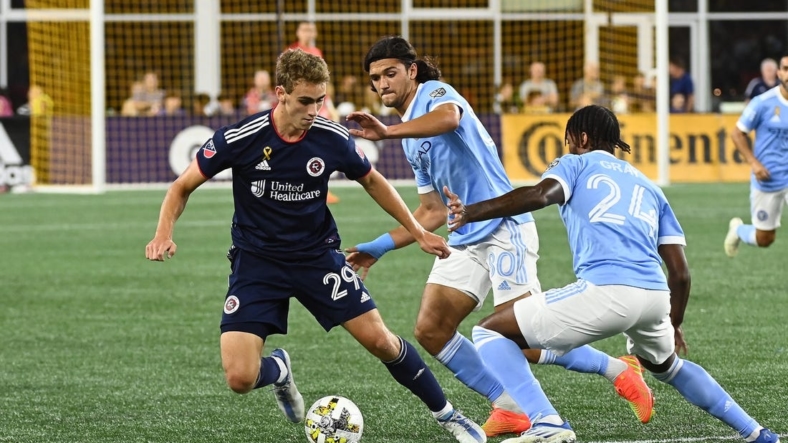 Jonathan Bell and Noel Buck scored in the first half and the host New England Revolution rolled to a 3-0 victory over the slumping New York City FC on Sunday night.

Tommy McNamara also scored as the Revolution (9-9-11, 38 points) snapped a four-game winless skid. New England made the most of having possession for 35.5 percent of the match, scored more than two goals for the third time this season and moved into seventh in the Eastern Conference.

The Revolution are two points behind sixth-place Columbus and four behind fifth-place Orlando City.

NYCFC continued to falter since Valentin Castellanos played his final game on July 23 and remained two points behind the third-place New York Red Bulls. The defending champions are 1-6-1 in their past eight games since Castellanos was loaned to Girona in Spain’s La Liga.

NYCFC was blanked for the sixth time this season and has allowed 16 goals during its slide.

New England struck first following one of its five corner kicks in the opening half. After three New York defenders were unable to clear the center of the box, Bell lifted a left-footed shot into the bottom left corner.

Buck scored by blasting a rising left-footed shot from outside the box into the bottom right corner past Johnson’s diving attempt.

Petrovic made a diving stop on Thiago Andrade three minutes before Buck scored. Petrovic then made a diving save in the 53rd minute on Andres Jasson and New England finished it off in the 66th minute when McNamara sent a right-footed shot from the center of the box into the bottom right corner.