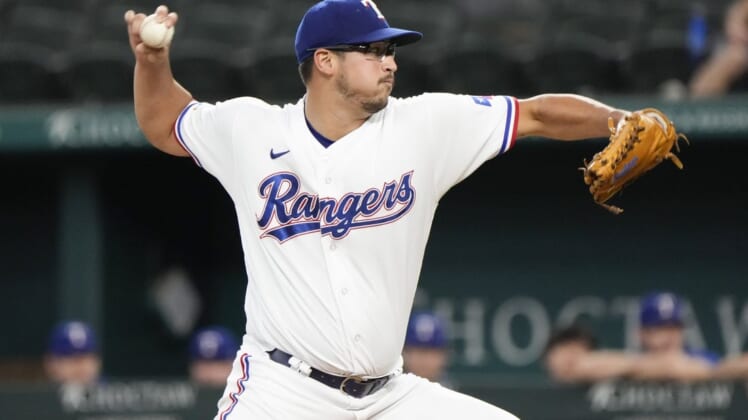 After a big spending spree last winter, the Texas Rangers were expecting a better return than sitting 10 games below .500 at this point of 2022.

That disappointment was tempered a bit in recent days as Texas took the final three games of a four-game series against the Minnesota Twins in Minneapolis.

The Rangers are 7-3 in their past 10 games as they head to Denver for a two-game set against the Colorado Rockies, beginning Tuesday night, before going home for five in a row.

On Monday night, the Rangers beat the Twins 2-1 behind another good outing from the pitching staff. Cole Ragans gave up five hits and one run in four innings, and four relievers combined to hold Minnesota to two hits over the five scoreless innings the rest of the way.

That came on the heels of a 7-0 win over the Twins on Sunday, which means Texas pitchers have given up just one run in the past 18 innings.

Dunning will look to keep that trend going when he takes the mound at Coors Field, and if his past few outings are any indication, he should be capable of matching what his teammates have done. Dunning is 2-0 with a 2.86 ERA in his five starts since coming off the injured list on July 26.

The right-ankle impingement that put him on the shelf doesn’t appear to be an issue. Dunning’s only appearance against the Rockies came on June 1, 2021, when he allowed two runs on six hits over 4 2/3 innings.

Dunning has won two of his past three starts after going more than three months without a victory.

“I can only control so much as soon as the ball leaves my hand,” Dunning said. “Even throughout the season — if I didn’t have run support or if I did — I was taking it every single day with the same attitude.”

Marquez has pitched well for the past two months but doesn’t have the record to show for it. He has tossed at least six innings in each of his past eight starts, making six quality starts, but is 2-4 in that stretch.

Colorado’s defense has been up and down this season, but it added a twist during a 9-8, 11-inning loss to the San Francisco Giants on Sunday. Third baseman Ryan McMahon had a sharp grounder go through the webbing of his glove for an error.

It was his team-leading 14th error of the season and spurred McMahon to make an equipment change.

“I couldn’t tell what happened,” McMahon said. “When I looked down, I had a huge rip in my glove. It’s tough, man. They get two runs (in the inning). It would have been an easy out. It’s a tough pill to swallow, but it’s out of my control.

“That’s my old baby glove, and I have been using that since high-A. I’m just going to put it in retirement now.”