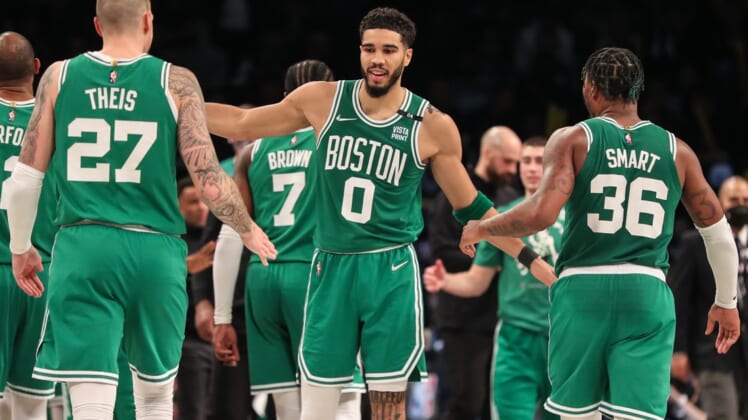 The Milwaukee Bucks are the defending NBA champions but the Boston Celtics are healthier, more rested and have home-court advantage heading into Game 1 of the Eastern Conference semifinal series on Sunday.

This series appears to be about as even as it could be, with both teams posting the same record in the regular season (51-31). The Celtics and Bucks each won at home to split their four-game season series.

The Bucks fell from the No. 2 to No. 3 seed and lost home-court advantage in this series on the last day of the regular season. Milwaukee elected to rest its starters in a setback to Cleveland, while Boston ascended in the standings by beating Memphis in the finale.

“They have every right to do what they please,” Celtics guard Marcus Smart said. “If that means that they thought by (resting starters), they didn’t need home-court against us or weren’t too worried about us, that’s fine. We’ll go out and we will play our game and let our game do the talking and see where it leads us.”

Boston’s defense did a lot of talking in the team’s first-round sweep of the Brooklyn Nets. The Celtics dispatched the Nets on Monday, while Milwaukee ended its first-round series versus Chicago on Wednesday with a 116-100 victory in Game 5.

The Bucks lost forward Khris Middleton to a sprained MCL in Game 2 on April 20. He’ll miss the beginning and perhaps all of this series.

The Celtics, who contained Kevin Durant and Kyrie Irving on the perimeter in their first-round series, now face a frontcourt comprised of 6-foot-11 Giannis Antetokounmpo, 7-foot Brook Lopez and 6-10 Bobby Portis.

“They’re a bigger team, so it’s probably going to be a more physical match-up,” Celtics forward Jayson Tatum said. “They pose different challenges than Brooklyn does.”

It’s going to fall on the Celtics’ team defense to try to slow down Antetokounmpo, the league’s second-leading scorer in the regular season (29.9 points per game). He also averages 11.6 rebounds per contest.

“We all know what Giannis is capable of, what he’s doing and what he’s going to try to do,” said Smart, the NBA’s Defensive Player of the Year.

“He makes it really tough because of how aggressive he is and how he can get in the lane to not only create for himself, but create for those other guys.”

“We’ve got to win with defense,” Antetokounmpo said. “We don’t know how many points we’re going to score with Khris being out.”

“Their bigs are all big and smart and have high defensive IQs,” Bucks head coach Mike Budenholzer said of the Celtics. “And obviously Marcus Smart has been recognized as the Defensive Player of the Year and a lot of respect for him and how he impacts the game, including keeping people out of the paint.”