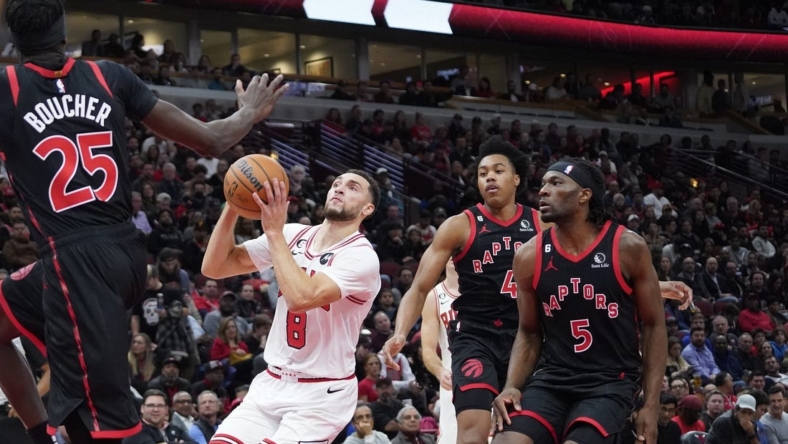 The Chicago Bulls finally got a chance to catch their breath.

But it didn’t help.

The Bulls, who played four sets of back-to-back games in their first 12 games, got their first three-day break of the season after a 115-111 home loss to the New Orleans Pelicans on Nov. 9.

But instead of looking refreshed, they looked rusty in a 126-103 home loss against the Denver Nuggets on Sunday, the team’s fourth defeat in five games.

Chicago hopes the ensuing two days off after that game are more beneficial as it visits New Orleans for a rematch Wednesday night.

“We should’ve been an extremely fresh basketball team (against the Nuggets),” Bulls coach Billy Donovan said. “The start was really disappointing.”

Chicago committed six turnovers and trailed by as many as 15 points in the first quarter. Leading scorer DeMar DeRozan didn’t even attempt a shot until midway through the second quarter.

The Bulls never led in the game, allowed 60.0 percent shooting (including 13 of 27 on 3-pointers) and turned the ball over 18 times.

“They were playing harder than us. That can’t happen,” said Zach LaVine, who led Chicago with 21 points. “We didn’t look good offensively. We couldn’t stop them defensively. And that’s the result you get.

“That’s on all of us collectively. You just can’t have a showing like that at home. It’s upsetting. It’s unacceptable from all of us, 1 through 15, coaching staff, everybody. We got our butt kicked out there.”

The Bulls came up short but were much more competitive in the first game against the Pelicans, which featured 14 lead changes and nine ties.

Brandon Ingram scored 18 of his 22 points in the second half and New Orleans won despite shooting just 3 of 19 on 3-pointers.

The Pelicans shot 3-pointers much better in a 113-102 home victory against Memphis on Tuesday night.

They made a season-high 18 3-pointers on 38 attempts and had six scorers in double figures even though leading scorer Zion Williamson was sidelined by a bruised foot that has him day-to-day.

“We got to the paint, kicked the ball out and we shot and made three’s tonight,” Pelicans coach Willie Green said. “That was huge for us.”

CJ McCollum broke out of a shooting slump to score a team-high 30 points, making 11 of 23 field-goal attempts, including 7 of 13 from beyond the 3-point line. He also had a game-high nine assists.

“We moved the ball well,” McCollum said. “I tried to make sure that I was passing early in the game. Especially in the first quarter, early easy passes hit the pocket, tried to get the ball into the paint, get it to the weak side, find guys and hopefully it becomes contagious.

“I thought we pushed the ball well in transition. I thought we did a good job of not hesitating, a lot of times guys are turning down threes, trying to cut, it messes up our spacing. You just got to take what’s there and I think tonight, we took what was there. I think guys took advantage and didn’t second guess themselves.”