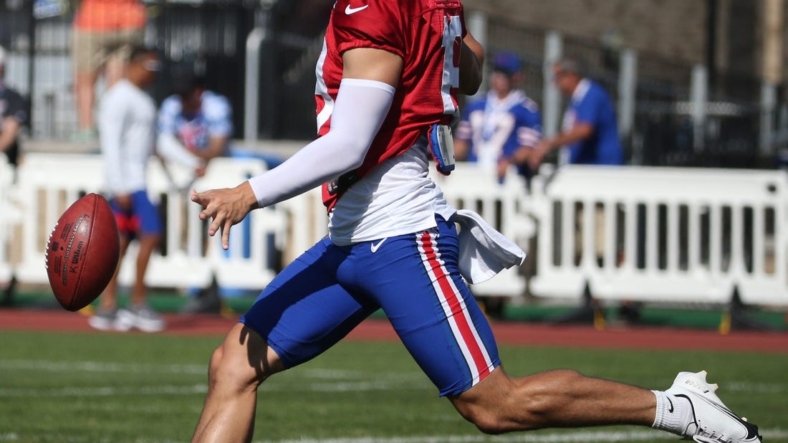 Araiza and two of his former teammates at San Diego State were accused of gang-raping a 17-year-old girl at a party last fall in a civil lawsuit filed Thursday in San Diego County Superior Court.

Araiza is the only punter on Buffalo’s roster after it cut Matt Haack earlier this week. Dan Gilleon, the attorney for the accuser referred to as Jane Doe in court documents, said the Bills had knowledge of the accusation against Araiza earlier this summer, before they made that roster decision.

Gilleon has also claimed that the Bills did not perform a thorough investigation after being informed of the allegations.

Gilleon released a diary entry of his client’s recollection of the night. She attended a house party and was approached by someone, allegedly Araiza, who offered her a drink. He then allegedly led her to a room where “several” other men already were, and they raped her for about 90 minutes.

Araiza’s attorney, Kerry Armstrong, has denied that his client raped anybody.

“It’s a shakedown because he’s now with the Buffalo Bills,” Armstrong told the Los Angeles Times.

Reports said that Araiza traveled to Charlotte with the team for Friday’s preseason game but was not seen on the field with kicker Tyler Bass and long snapper Reid Ferguson before the game. Backup quarterback Matt Barkley warmed up as the punter.

Araiza was a sixth-round pick of the Bills in the 2022 NFL Draft. At the time of the rape, Araiza was in the midst of an unprecedented season and had earned the nickname “Punt God” for his pattern of long booming kicks. He was a unanimous All-American and won the Ray Guy Award as the nation’s top punter.

The Bills have only addressed the accusation via a statement Thursday, in which they said they “conducted a thorough examination of this matter” and would have no other comment with the civil case ongoing civil.