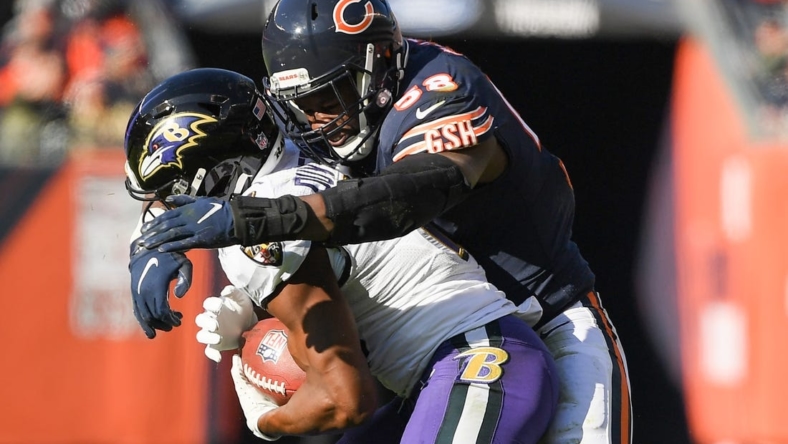 NFL leading tackler Roquan Smith is relocating from the Chicago Bears to the heart of the Baltimore Ravens’ defense, according to multiple reports.

ESPN reported the Bears agreed to trade Smith to the Ravens for second- and fifth-round draft picks in 2023, following the rebuild pattern of shedding salary since general manager Ryan Poles took over the team in January.

Smith, 25, is a two-time second-team All-Pro with the Bears and was drafted eighth overall out of Georgia in 2018. He represents an upgrade in the middle of the 3-4 defense in Baltimore, which now stacks three first-rounders at the position in Patrick Queen (2020, 28th overall), Odafe Oweh (2021, 31st) along with proven veterans Justin Houston and Jason Pierre-Paul at the fourth LB spot.

The Ravens are atop the AFC North at 5-3, but defensive standards are not being met.

While the Bears are set with a potential $140 million to $150 million under the salary cap for 2023 free agency, they now start over without the centerpiece of their defense in Smith. Poles traded defensive end Robert Quinn to the Philadelphia Eagles last week.

The league-leader in tackles at 83, according the NFL’s official statistics, Smith is in the final year of his rookie contract. Negotiations between Poles and Smith’s representatives became contentious before training camp, when he demanded a trade.

The trade of Quinn hit Smith hard when he learned of his departure during a press session last Wednesday.