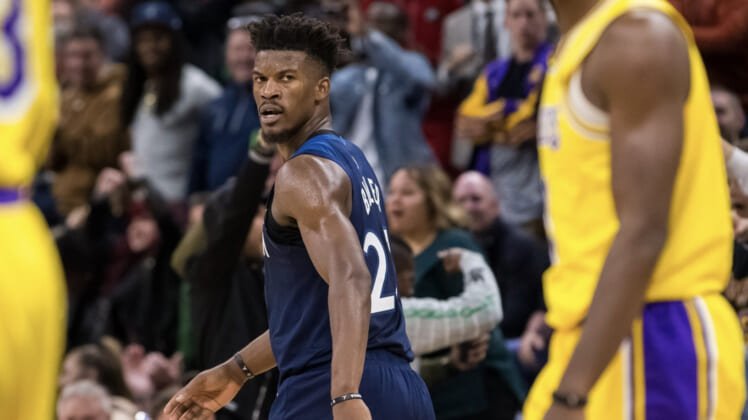 As the Minnesota Timberwolves and Jimmy Butler continue with what has been both a drama-filled and pedestrian start to the 2018-19 season, the embattled All-NBA performer will rest for Wednesday’s game against the Utah Jazz.

This will be the second game an otherwise healthy Butler will sit thus far on the young season. While he’s expected to join his teammates for their trip to the Bay Area on Friday, trade talks with other teams continue.

According to ESPN’s Adrian Wojnarowski, said talks have stalled due to what other clubs view to be an asking price that remains too steep.

Sources: The Timberwolves suggested that Jimmy Butler rest vs. Utah tonight and there’s an expectation that he will join the team on flight to Bay Area to play Golden State on Friday. Teams talking to Minnesota about trades say that the asking price remains steep.

In no way can this be considered breaking news. The Houston Rockets had previously offered up a package centering around four future first-round picks. Apparently, that was not enough to get it done.

Meanwhile, the Miami Heat are pretty much out of the race after being linked primarily to Butler in trade talks heading into the season.

At this point, we’re not expecting a conclusion to this entire drama until closer to February’s trade deadline. This is unfortunate for a Wolves squad that’s struggled to a 3-4 start to the season.