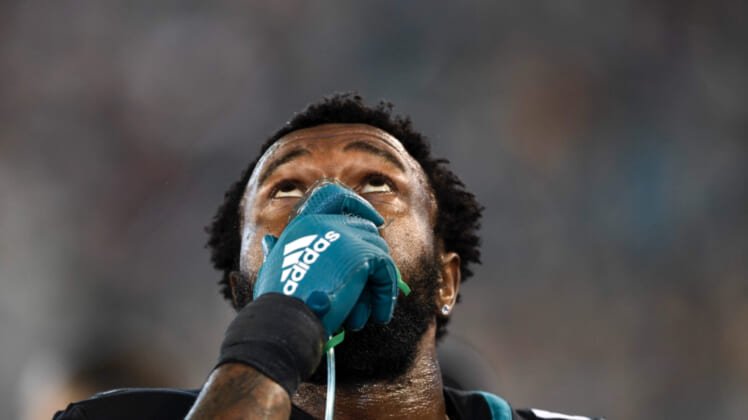 It becoming more and more clear that the Jacksonville Jaguars and Pro Bowl pass rusher Yannick Ngakoue are headed for an ugly divorce.

Potentially set to blow the entire thing up after the trade of cornerback A.J. Bouye earlier this week, Jacksonville will place the franchise tag on Ngakoue.

In turn, the 24-year-old pass rusher has no intention of signing it and would like a trade. That will likely come to fruition here soon.

If so, Tony Pauline of Pro Football Network suggests that the Seattle Seahawks will have interest. The insider even goes as far as outlining a potential trade.

“I’ve been told by a very good source that the Seahawks would like to acquire Yannick Ngakoue via trade,” Pauline reported. “My sources tell me they believe compensation would include something like a second-round selection and possibly a situation where the Seahawks swap their pick in round one for the Jags pick in the second round.”

This makes too much sense. Seattle could very well lose fellow pass rusher Jadeveon Clowney in free agency. He’s said to be looking to reset the edge rush market.

Even if the Hawks were to retain Clowney, they need another top-end pass rusher opposite him. Last year’s first-round pick L.J. Collier already looks like a bust.

Ngakoue has been among the best pass rushers in the NFL since entering the league as a third-round pick back in 2016. The Maryland product has recorded 87 quarterback hits and 37.5 sacks in four seasons.

Seattle has an additional second-round pick in April’s draft stemming from the Frank Clark trade. It has the resources to make a move of this ilk.