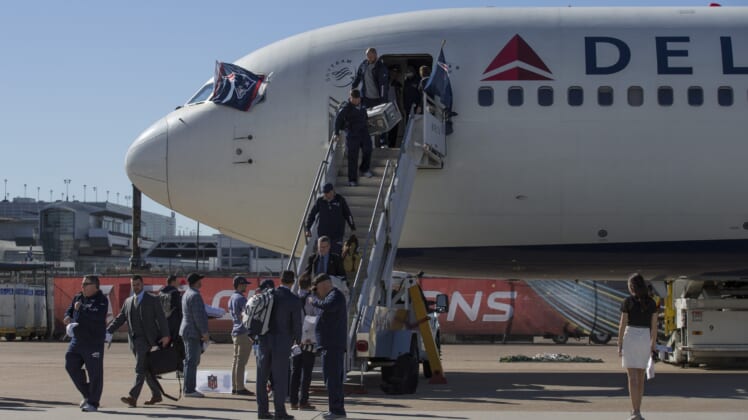 Over half of the NFL could go without chartered flights next season, according to reports from Forbes and Pro Football Talk. The Arizona Cardinals, Baltimore Ravens, Indianapolis Colts, Jacksonville Jaguars, Miami Dolphins and Pittsburgh Steelers’ charter agreements with American Airlines have been suspended, according to a memo obtained by Forbes.

“We wanted to let you know of a strategic change to our NFL charter commitments this fall,” says the memo obtained by Forbes. “Network planning has advised we will have fewer aircraft available for charter flying in 2017 and after careful analysis it is necessary to reduce the number of NFL teams we carry this season.

“This was a very tough decision as many of the teams have been longstanding customers of the airline. The decision came down to available aircraft, location and input from senior leadership.

“We have completed the difficult task of notifying the Cardinals, Ravens, Dolphins, Colts, Jaguars and Steelers that we will not be able to support them this season.

“For those of you who worked these teams, we share your disappointment,” the memo said. “We hope to have the opportunity to support these teams in the future should resources become more readily available.”

Mike Florio of PFT followed that up with a report saying that roughly 20 teams could eventually lose chartered flights.

“The issue, based on information from PFT’s source, extends beyond American Airlines. Delta is believed to be doing the same thing, and United could be next. The source said that roughly 20 teams currently don’t have a charter provider for the coming season, and that it could become a ‘real issue’ for the league.”

This is a massive deal. It’s easy to laugh at things like this and call NFL teams spoiled, but teams that lose chartered flights will be at real disadvantages.

NFL players are generally massive human beings. Flying in regular planes without leg room will cause physical debilitation. Not to mention the potential for delays, loss of baggage or being served terrible food. That sounds trivial, but when you are required to collide into other human beings for three hours every Sunday, it makes a big difference in how you perform.

Teams that lose chartered flights will likely find a solution other than finding the cheapest flight on Kayak every week. One would imagine that Jerry Jones has a private plane of his own and other airlines will jump at the chance to fly teams like the Steelers. Even the Jaguars have enough money to charter their own plane if nobody jumps to sponsor them.

In the end, this will likely be nothing more than a minor annoyance to teams that lose chartered flights. However, if any team does end up going without them this year, don’t be surprised when they can’t win on the road.