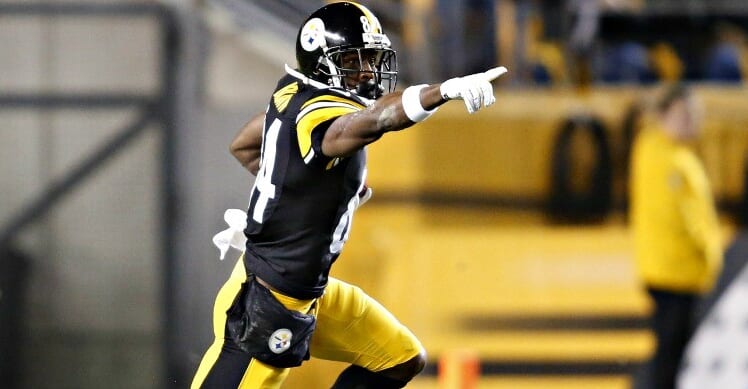 After wrapping up a five-year extension for T.Y.Hilton, super-agent Drew Rosenhaus is reportedly headed to Jacksonville to meet with Pittsburgh Steelers brass to discuss an extension for receiver Antonio Brown.

Rosenhaus negotiated a five-year extension for Hilton worth $65 million on Thursday morning, but you can bet he’s angling for a bigger figure for Brown. Ian Rapoport of NFL Network scooped this report, “per a source informed of the plans,” as NFL.com’s Kevin Patra noted.

Brown is truly one of the game’s elite receivers, despite his diminutive size. At just 5-foot-10 and 180 pounds, he routinely makes plays that make our jaws drop. Relying on Mercury-like speed and quickness, Brown gets in and out of his breaks better than anyone in the NFL, and his route-running is flawless.

He and quarterback Ben Roethlisberger have developed the kind of chemistry over the past few seasons that every quarterback/receiver duo dreams about. The results speak for themselves, and Brown ascended into the stratosphere of NFL greatness last year with 129 catches for 1,698 yards (leading the league in both categories) and 13 touchdowns.

Brown signed a six-year deal worth $43 million in 2012, but he has since outplayed that contract. As noted by Patra, his current deal has him being paid as the 14th-best receiver in the league, when in reality he should be getting paid in the same fashion as Dez Bryant and Demaryius Thomas—both of whom inked five-year deals worth $70 million in July.

Brown knows he deserves more than he’s getting but made a commitment this offseason to play in 2015, whether he got a new deal or not.

“Holdouts never go well,” Brown said . “Just look at history. It always ends badly. It wouldn’t be the best decision. I make a lot of money. I pull up to camp in Rolls-Royces.”

His words were a far cry from the tantrums Mike Wallace had when he was seeking a new deal with Pittsburgh back in 2012. No doubt his willingness to be a team player and let the money handle itself has a lot to do with the upcoming contract negotiations.