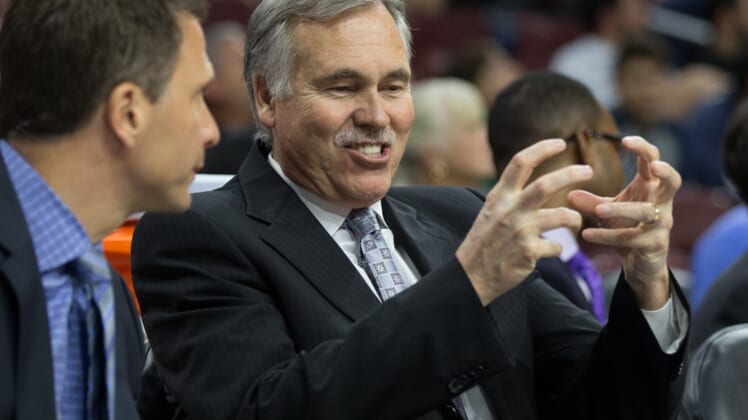 On the same day that interim head coach J.B. Bickerstaff withdrew his name from consideration for the Houston Rockets full-time job, a report is surfacing indicating that veteran coach Mike D’Antoni will interview for the job:

Casting a wide net is completely understandable for a Rockets team that struggled through the 2015-16 season, only to lose to the Golden State Warriors in five games in the opening round of the playoffs.

Though, there’s a legitimate question about D’Antoni’s ability to actually bring new blood to the fledgling organization.

The current Philadelphia 76ers associate head coach last manned an NBA sideline with the Los Angeles Lakers in 2013-14, posting a 27-55 record in the process. That came just a couple years after he resigned as the head coach of the New York Knicks following an 18-24 start to the 2011-12 campaign.

The experience is surely here. D’Antoni has served as a head coach for four different teams, beginning that part of his career as an interim for the Denver Nuggets back in 1998-99.

In parts of 12 seasons as a NBA head coach, D’Antoni’s squads have made the playoff six times, making it as far as the conference finals twice.

Among other head coaching candidates for the job, current Sacramento Kings assistant and Rockets legend Sam Cassell has already interviewed for the job.

It makes sense that the Rockets would put up a rather huge net regarding their coaching search. After all, the team has had two different coaches man the sidelines over the past six months after firing Kevin McHale early in the 2015-16 season and replacing him with Bickerstaff.