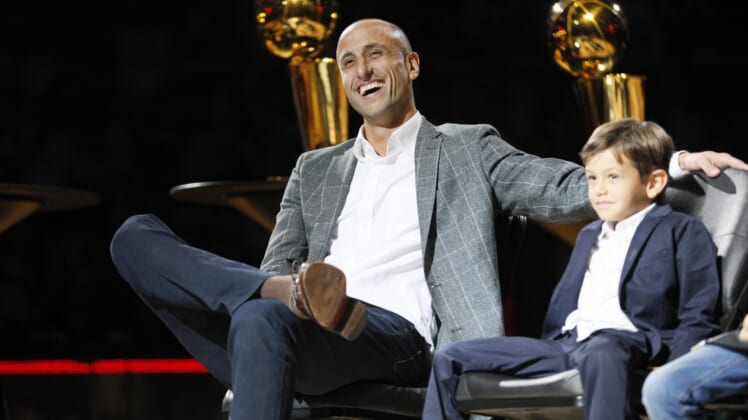 San Antonio Spurs icon Manu Ginobili will be inducted into the Naismith Memorial Basketball Hall of Fame in his first year on the ballot, The Athletic reported Thursday.

Ginobili won four NBA titles with San Antonio and led Argentina to the gold medal at the 2004 Summer Olympics.

Hardaway played 13 seasons for the Golden State Warriors, Miami Heat, Dallas Mavericks, Denver Nuggets and Indiana Pacers, averaging 17.7 points and 8.2 assists for his career. He was a college star at UTEP and a member of the 2000 gold medal-winning U.S. Olympic team.

Cash played 15 seasons in the WNBA for the Detroit Shock, Seattle Storm, Chicago Sky, Atlanta Dream and New York Liberty, winning three WNBA championships. A forward, she averaged 10.7 points and 5.3 rebounds for her career and was a four-time All-Star selection.

Karl ranks sixth in NBA history in victories (1,175), guided the Seattle SuperSonics to the 1996 NBA Finals and posted 12 seasons of 50 or more victories.

Huggins, currently the coach at West Virginia, has guided teams to 25 NCAA Tournament appearances, including Final Four berths in 1992 (Cincinnati) and 2010 (West Virginia). He has a lifetime 844-374 record over 37 seasons at Akron, Cincinnati, Kansas State and West Virginia.

The inductees will be formally announced Saturday at the Final Four in New Orleans. Finalists needed to receive 18 of a possible 24 votes from the Honors Committee for selection to the Hall of Fame.