Report: Luke Walton still has the backing of Lakers owner 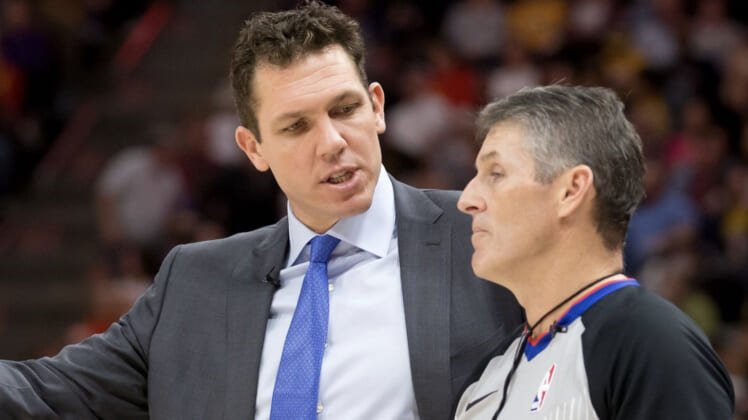 The Los Angeles Lakers have dropped from a top-four seed on Christmas Day to completely out of the Western Conference Playoffs in a matter of less than a month.

It’s obvious that the loss of LeBron James to a groin injury has played a role in this free fall. Los Angeles boasts a 3-7 record since James suffered said injury in a blowout win over the Warriors.

This has led to speculation that head coach Luke Walton’s seat could be getting hot. But according to Marc Stein of The NY Times, that couldn’t be any further from the truth.

“It is also an open secret in Lakerland that Walton has the strongest possible backing from the owner Jeanie Buss,” Stein reported. “Even if the front office tandem of Magic Johnson and Rob Pelinka held Walton responsible for the Lakers’ swoon and wanted to make an in-season change, Buss almost certainly would prevent such rashness.”

Unlike in Cleveland, Buss wields most of the power in Southern California. She’s not going to make a move even if president Magic Johnson and/or general manager Rob Pelinka wants her to.

Heck, James himself doesn’t have much say here. It’s a much different dynamic for the game’s most powerful basketball player than what we saw during his Cavaliers days.

Here are the facts. Walton boasts an 84-124 record in two-plus seasons as the Lakers head coach. That’s just not good enough.

Fortunately for Walton, he also took over a completely broken team from former head coach Byron Scott. That gives him some leeway from the Lakers’ brass.

Whether this continues if the Lakers can’t get Turn this around remains to be seen. But for now, Walton’s job appears to be safe.